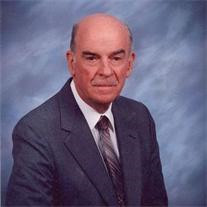 Robert Asa Johnson, 88, of Rossville, IL, passed away at 6:15 A.M. Saturday, August 11, 2012, at Carle Foundation Hospital in Urbana, IL. He was born March 5, 1924 in Marengo, Iowa, the son of Asa and Abigail (Bigbee) Johnson. He married Wilma Elizabeth Hamilton on March 26, 1947 in Troy, KS. She survives in Rossville, IL. Other survivors include: two daughters; Patrice (Wayne) Huston of Hamilton, OH and Janice (David) Ray of Rossville; three sons; Stephen (Rebecca) Johnson of Streator, IL, Phillip (Linda) Johnson of St. Joseph, IL and Robert Randall (Kris) Johnson of Lake Havasu City, AZ; eleven grandchildren, eight great-grandchildren and many nieces and nephews. He was preceded in death by: his parents, 5 brothers, Clark, Wayne, Everett, Donald and Ralph and 2 sisters, Emeline and Dorothy. Mr. Johnson worked as an engineer for F.M.C. in Hoopeston, IL, until his retirement. Robert served in the United States Marine Corp. during World War II. He was a member of the Rossville United Methodist Church. He was also a member of the American Society of Agricultural Engineers, past President of the Rossville-Alvin School Board, Bethel Lutheran Church Board and the Jayco Camping Club. Robert enjoyed many kinds of music including hymns, polkas and marches. He played the clarinet, harmonica, organ and accordion. He also enjoyed fishing, camping, gardening and square dancing.

The family of Robert Johnson created this Life Tributes page to make it easy to share your memories.