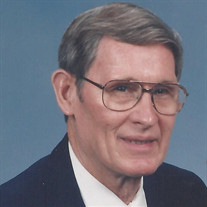 Robert Eugene “Bob” Gummere, 82, of Hoopeston, IL, passed away at 11:00 P.M. Sunday July 20, 2014 at his son’s home in Zionsville, IN. He was born September 29, 1931 in Danville, IL, the son of John and Maude (Griffin) Gummere. He married Marjorie Woodward on July 11, 1954 at the Central Christian Church in Danville, IL. She survives in Hoopeston. He is survived by four sons, Jim (Donna) Gummere of Niceville, FL, Steve (Julie) Gummere of Calhoun, GA, Doug (Toni) Gummere of Zionsville, IN and Phil (Beth) Gummere of San Angelo, TX; one sister, Mary Rodgers of Danville, IL; one brother, Thomas (Karen) Gummere of Danville, IL; 21 grandchildren; 24 great-grandchildren and many nieces and nephews. He was preceded in death by his parents; one sister, Virginia Hasselbring; 2 brothers, Joe and Bill Gummere and one granddaughter, Cynthia Lee Gummere. Bob worked at General Motors prior to working for Sheridan’s in Hoopeston, where he repaired televisions. He later opened his own television repair business which he owned and operated for many years. Bob served in the United States Army from 1950-1953. He was a member of the Hoopeston First Christian Church Disciples of Christ, where he was very active. Bob was a square dance caller for 45 years, which he also taught and was a past little league baseball coach. He enjoyed playing the guitar and singing at family gatherings and also for the residents at the nursing home and Autumn Fields. Bob also enjoyed yodeling, camping and traveling to Nashville. Please visit www.anderson-funeral-home.com to view Bob’s eternal tribute page and to send the family condolences. .

The family of Robert Eugene "Bob" Gummere created this Life Tributes page to make it easy to share your memories.

Send flowers to the Gummere family.