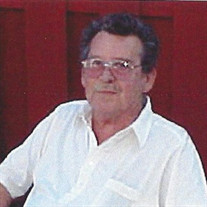 Robert Gene “Bob” Glenn, 80, of Hoopeston, IL, passed away at 1:56 A.M. Friday August 22, 2014 at Presence United Samaritans Medical Center in Danville, IL. He was born October 10, 1933, in Hoopeston, IL, the son of Herbert and Verna (Cox) Glenn. He married Elizabeth Pruitt on June 19, 1954, at the First Church of God in Hoopeston, IL. She survives in Hoopeston. He is survived by one son, Robert (Sandy) Glenn II of Monticello, IN; one sister, Rozanna (Raymond) Ester of Anderson, IN; one brother, Dale (Joyce) Glenn of Georgetown, FL; five grandchildren, Robert Glenn III, Kristy Glenn, Cassie Sherfy, Amber Morgeson and Abby Morgeson; 15 great-grandchildren and many nieces and nephews. He was preceded in death by her parents; two daughters, Cindy Jo and Peggy Lee and two brothers, John and Ralph Glenn. Robert worked at Food Machinery Corp. in Hoopeston for 40 years. He served in the United States Marine Corp. from 1951-1954, during the Korean War, where he received a bronze star. Robert was a member of the First Church of God in Hoopeston. He enjoyed fishing, hunting and spending time with his family. Military rites will be accorded by the Hoopeston American Legion Post #384 and the Hoopeston VFW "BUDDY EGNEW" Post #4826 at the funeral home following the service. Per his wishes, no burial will be held and his ashes will be scattered. Memorials may be made to the Presence United Samaritans Cancer Care Center 812 N. Logan Ave. Danville, IL 61832.

The family of Robert Gene "Bob" Glenn created this Life Tributes page to make it easy to share your memories.