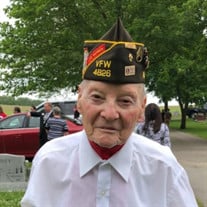 Robert “Bob” Dilley, 89, of Hoopeston, IL passed away at 9:55 A.M. on Wednesday, August 5, 2020 at Iroquois Memorial Resident Home in Watseka, IL. He was born May 28, 1931 in Hoopeston, the son of Vader and Lydia (Matthews) Dilley. He married Mae Huff. Bob is survived by two daughters, Penny (Mike) Conner of Hoopeston, IL and Lorrie (Tim) Webb of Parsons, KS: two grandchildren, Daniel Conner and Katherine Conner with fiancé Richard Morris, one great – grandchild, Quinten and many nieces and nephews He was preceded in death by his wife, parents, four sister, Nadine Longfellow, Thelma Miller, Sally Kirts, and Delores Cox, two brothers, Ardell Dilley and Tony Dilley and a special friend, Beverly Larkin Bob was a Foundry worker at FMC Corporation for 35 years. He served in the Army during the Korean War and was awarded a purple heart and numerous other medals. He was a member of the VFW and the American Legion in Hoopeston and served with the American Legion Color Guard. He attended the Christian Church in Hoopeston. He enjoyed exercising, watching war movies and Wheel of Fortune, having diet cokes and popcorn at the VFW, a good buffet and the Blue Light specials. A visitation will be held 5:00 P.M. -8:00 P.M. Thursday, August 13, 2020 at Anderson Funeral Home 427 E. Main St. Hoopeston, IL. A Funeral Service will be held 10:00 A.M. Friday, August 14, 2020 at Anderson Funeral Home. Due to COVID 19 restrictions, anyone planning to attend the visitation and/or funeral is recommended to wear a face covering and groups of fifty will be allowed in the building at one time. The burial will follow at Floral Hill Cemetery with military rites accorded by the American Legion Post 384. Memorials may be made to the Hoopeston Multi Agency 206 S. First Ave Hoopeston, IL 60942 or IMH Resident Home 200 E. Fairman Ave Watseka, IL 60970.

The family of Robert "Bob" Dilley created this Life Tributes page to make it easy to share your memories.

Send flowers to the Dilley family.