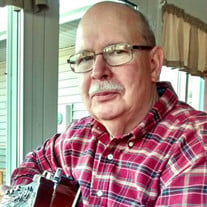 Robert Harold “Bob” Charbonneau, 66, of Hoopeston and formerly of Kankakee, finished the race, passed this life and was welcomed into the arms of his Lord at 11:25 a.m. Monday, June 4, 2018, at Heritage Health Therapy and Senior Living, Hoopeston. Bob was born April 5, 1952 at Kankakee, the son of Hector W. and Mary Electa Frazier Charbonneau. He married Angela Miller on Aug. 21, 1975, at Kankakee. She preceded him in death on Aug. 1, 2000. He later married JoAnn Gocking on June 22, 2002, at Hoopeston. Surviving to cherish the gift of his memory are his loving wife, JoAnn Charbonneau of Hoopeston; one son, Jason (Stacy) Charbonneau of Papineau; one stepdaughter, Rebecca (Kevin) Mullikin of Clifton; two stepsons, Stephen Miller and Robert Miller, both of Kankakee; a sister, Deborah (Lyle) Meyer of Bonfield; a brother, William (Karen) Charbonneau of Dyer, Ind.; eight grandchildren: Zackary (Kristine Bodemer) Charbonneau, Katelynn (Brett) Duby, Logan Charbonneau, Vincent Cook, Cassandra (Sean Jardine) Price, Racheal, Jeffery and Alicia Miller; two great-grandchildren, Justin Jardine and Natalee Duby; and several nieces and nephews, including a special niece, Sherry (Chris) Hammersley of Bonfield. He is also survived by his devoted “fur babies” TJ, Minerva and Molly and will be welcomed at the Rainbow Bridge by Samantha, Timmy and Lucy. He was preceded in death by his parents, two sisters and an infant granddaughter. Bob graduated from Bradley-Bourbonnais High School in 1970. He held several certifications in computer programming, electrical engineering and purchasing management from Control Data Corporation and United State Steel Corporation. He retired after 30 years with U.S. Steel where he worked in purchasing and materials management. He also worked as a purchasing manager for Atlas Tube in Chicago and Thyssen-Krupp Crankshaft in Danville. From 2008-2014, he owned and operated The Christian Handyman LLC in Hoopeston, specializing in computer service and repair. He enjoyed traveling, visiting garage sales, antique stores and flea markets with his wife, riding his motorcycle and playing the guitar. He also took great pride in caring for his lawn and landscaping. His greatest enjoyment, however, was sharing his faith in God with anyone who would listen. Bob was baptized in the Catholic Church, but spent his later years serving and worshipping in several faith communities, most recently the Hoopeston First Church of God and the Hoopeston Community Church of the Nazarene. A visitation will be held 4:00 – 7:00 P.M. Thursday June 7, 2018 at Anderson Funeral Home 427 E. Main St. Hoopeston, IL. The funeral service will be held at 11:00 A.M. Friday June 8, 2018 at the funeral home. Burial will follow in Floral Hill Cemetery in Hoopeston. Memorials are suggested to the Hoopeston Public Library 110 N. 4th St. Hoopeston, IL 60942 or the Hoopeston Animal Rescue Team (HART) 901 W. Main St. Hoopeston, IL 60942.

Robert Harold &#8220;Bob&#8221; Charbonneau, 66, of Hoopeston and formerly of Kankakee, finished the race, passed this life and was welcomed into the arms of his Lord at 11:25 a.m. Monday, June 4, 2018, at Heritage Health Therapy and Senior... View Obituary & Service Information

The family of Robert "Bob" Charbonneau created this Life Tributes page to make it easy to share your memories.

Send flowers to the Charbonneau family.