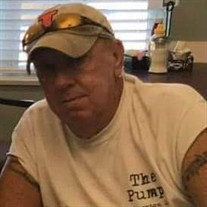 Ricky Allen “Ricky G” Gagnon, 68, of Hoopeston, IL, formerly of Rossville, IL, passed away at 10:45 A.M. Saturday August 28, 2021, at his home. He was born January 2, 1953, in Danville, IL, the son of Charlie Billingsley and Anita (Burton) Gagnon. He was later adopted by Don Gagnon. He is survived by two daughters, Angela (Billy) Trumann of Rossville, IL and April Gagnon of Owaso, OK; 3 half-sisters, Tammy (Eric) Roberts of Rossville, IL, Joy (Anthony) Greer of Glasgow, KY, and Bonnie Billingsley of Glasgow, KY; 8 grandchildren, Michael, Ashley, Aly and Amber Zarate and Josh, Jordan, Jaslynn, and Journey Gagnon; 11 great-grandchildren; and special friend, Michelle Billingsley. He was preceded in death by his parents; infant brother, Steve; and best friend, Rick Lawson. Ricky worked at FMC in Hoopeston for 31 years and later owned Ricky G’s in Rossville for several years. He most recently worked at Crop Production Services which became Nutrien Ag Solutions. He loved to work and socialize with his friends. He was an avid sports fan and enjoyed watching the Fighting Illini and the Chicago Bears. Ricky also enjoyed playing softball and bowling. Cremation rites will be accorded, and a visitation will be held 4:00 – 6:00 P.M. Tuesday September 7, 2021, at Anderson Funeral Home 427 E. Main St. Hoopeston, IL. A memorial service will follow the visitation and will begin at 6:00 P.M. Tuesday at the funeral home with Eric Roberts officiating. No burial will be held. Memorials may be made to the donor’s choice.

The family of Ricky Allen "Ricky G" Gagnon created this Life Tributes page to make it easy to share your memories.

Send flowers to the Gagnon family.