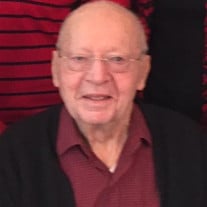 Richard J. “Dick” Martin, 89, of Hoopeston, IL, passed away on Saturday May 6, 2017 at Carle Hoopeston Regional Health Center. He was born on June 13, 1927 to Nye and Naomi (King) Martin at the Home Hospital, 702 E. Penn St., Hoopeston, Illinois. He married his wife of almost 68 years Evelyn (Hofer) on June 19, 1949. She survives. Also surviving are his four children: Linda Martin of Hoopeston, IL, Carol Martin (Shari Grote) of Minneapolis, MN, Donna Martin (Sarah Reckmeyer) of Ottawa, IL, and David Martin (Brenda Villa) of Cincinnati, OH; two grandsons: Sean (Bianca) Danner of College Station, TX and Scot (Jen) Danner of Danville, IL; and one great-granddaughter, Madison Danner. He was preceded in death by his parents. Dick attended Frank School, a one-room schoolhouse, from grades 1-8. He graduated from East Lynn High School in 1944 and University of Illinois in 1949. He served in the United States Navy from 1945 to 1946. Dick began his professional career teaching agriculture and serving as FFA sponsor in the towns of Wyoming and Shabbona, Illinois. He returned to Hoopeston to farm with his father, Nye Martin. Dick farmed for 33 years, raising his family on Maple View Farm. After retiring from farming, Dick returned to teaching at Bismark-Henning High School. Dick was a 76-year member of First Presbyterian Church, serving as elder and clerk of session. He delivered Meals on Wheels. He was also a member of the Sweet Corners Square Dance Club, Owl Club, Eastern Star, and he was a 32nd Degree Mason. Per his wishes, he will be cremated. A memorial service celebrating Dick’s life will be held at 1:00 p.m. on Tuesday, May 9, 2017, at the First Presbyterian Church 915 E. Orange St. Hoopeston, IL, with Rev. Wade Meranda and Rev. Ann Schwartz officiating. Visitation will be held from 11:00 A.M. – 1:00 P.M. at the church, with masonic rites at 11:00 A.M. Military rites will be accorded by the Hoopeston American Legion Post #384. The family would appreciate memorial gifts be given to the First Presbyterian Church, 915 E. Orange St. Hoopeston, IL 60942 or the Hoopeston Star Lodge #709, 208 W. Orange St. Hoopeston, IL 60942.

The family of Richard "Dick" Martin created this Life Tributes page to make it easy to share your memories.

Send flowers to the Martin family.