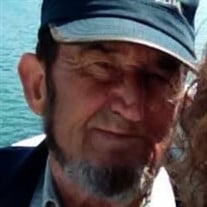 Richard Clayton "Dick" Hampton, 71, of Hoopeston, IL, passed away at 6:49 A.M. Thursday February 16, 2017 at Carle Foundation Hospital in Urbana, IL. He was born March 7, 1945, in Danville, IL, the son of Emory Hampton and Reba (Long) Hampton Fleming. He married Carolyn Kay Edwards. They were married and looked after each other for fifty two years. She survives. He is survived by one son, Richard Emory Hampton; one daughter, Angelena Marie Hampton (Joshua Jerome); ; two grandchildren, Maya Madaleine Webber (father David Webber) and Pandora Jynx Jerome; one sister, Shirley Pettice; one brother, Charles "Chuck" Hampton; a special niece, Melody Phillips; sister-in-law, Ruby Hampton; four brother-in-laws; four sister-in-laws and their families. He was preceded in death by his father; mother; step-father, Jay "Dude" Fleming; one sister, Beverly Thomas; his in-laws, Albert (Sandy) and Lena Edwards and one brother-in-law, Dave Pettice. Richard was a press mechanic at American Can until his retirement and cared about those he worked with. He developed a love of farming working with his father at a young age and after retirement was thankful for the opportunity to farm with the wonderful Fry family. He also enjoyed driving the Migrant Head Start bus and the many lasting friendships that he made with the staff and families that he served. Richard's hobbies included boating, camping and motorcycling. He especially loved attending both of his granddaughters' events. Cremation rites will be accorded and a tribute to the life of Richard will be held at 10:30 A.M. Tuesday March 7, 2017 at his home at 401 E. Penn St. Hoopeston. All who knew and loved him are welcome to attend. The service will be officiated by a special friend, Lymarie Fry. Memorials may be made in memory of "Papa Lincoln" to the Hoopeston Area Music Boosters 615 E. Orange St. Hoopeston, IL 60942.

The family of Richard "Dick" Hampton created this Life Tributes page to make it easy to share your memories.

Send flowers to the Hampton family.