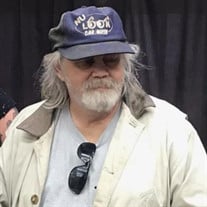 Richard Emerson “Rich” Doss, 71, of Georgetown, IL, passed away at 8:20 P.M. Thursday August 12, 2021, at Clark Manor Skilled Nursing Facility in Chicago, IL. He was born January 8, 1950, in Danville, IL, the son of Elmer “Dick” Doss and Mary (Allen) Turner. He married Cheryl O’Neil and together they had two children who survive, daughter, Lisa (Alonza) Galyen of Glasford, IL and son, Steven Doss of Los Angeles, CA. He is also survived by one sister, Linda (Tony) Lutchka of Westville, IL; two grandchildren, Kristopher and Amber Galyen; one great-granddaughter, Layla Marion; 4 nieces; and 3 nephews. He was preceded in death by parents; grandparents; and one brother, Millard “Gene” Watts. Richard worked as a welder and mechanic. He also had a teaching degree from Eastern Illinois University. He was an avid race fan and was a driver and mechanic of a race car for many years. Richard also enjoyed riding motorcycles, fishing, and spending time with his dog, Annie, who was also his best friend until her death a few years ago. A visitation will be held 11:00 A.M. – 1:00 P.M. Friday August 20, 2021, at Anderson Funeral Home 427 E. Main St. Hoopeston, IL. A graveside service will follow the visitation and will begin at 1:15 P.M. Friday at Floral Hill Cemetery in Hoopeston, with Pastor Gary Milton officiating. Memorials may be made to Ruby’s Rescue Retreat 4035 County Road 600 North McClean, IL 61754.

The family of Richard Emerson "Rich" Doss created this Life Tributes page to make it easy to share your memories.

Send flowers to the Doss family.