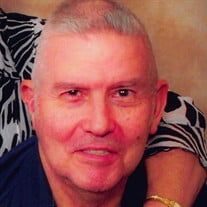 Richard “Dick” Lewis Reynolds, 81, of Hoopeston, IL, passed away at 3:25 A.M. Thursday October 5, 2017 at Heritage Health Therapy and Senior Living in Hoopeston. He was born at home in Rossville, IL, on June 10, 1936, the son of Everett and Mellissa (Hillard) Reynolds. He married Sharon Kay Craig on April 21, 1963. She preceded him in death on February 23, 2016. He is survived by two sons, Tim (Susan) Reynolds of North Canton, OH and Bill Reynolds of Hoopeston, IL; one sister-in-law, Vicki Lackey of Hoopeston, IL; one brother-in-law, Richard Craig of Stonefort, IL; 6 grandchildren, Sherman (Sarah) Reynolds, Julie Dunlap, Andrew Reynolds, Luke Reynolds, Erica (Preston) Anderson and Jerry (Puisan) Reynolds; 5 great-grandchildren, Brayden Reynolds, Landon Toot, Toby Artzner, Cullen Reynolds and Ainsley Reynolds and 10 nieces and nephews. He was preceded in death by 3 sisters, Helen, Onnie and Lois; and 1 brother, Ray. Richard worked at Silgan in Hoopeston for 28 years, until his retirement. He served in the United States Army and was a member of the Antioch Church of Christ in rural Rossville. He was a past coach for Pee Wee football in Hoopeston, which he thoroughly enjoyed. Richard loved tinkering in his garage, watching television especially westerns and the Gaither’s and family get-togethers. Per his wishes he will be cremated. A visitation will be held 4:00 – 6:00 P.M. Thursday October 12, 2017 at Anderson Funeral Home 427 E. Main St. Hoopeston, IL. A memorial service will follow the visitation and will begin at 6:00 P.M. Thursday at the funeral home, with Rev. Earl Eells officiating. No burial will be held. Military rites will be accorded by the Hoopeston American Legion Post 384. Memorials may be made to the Antioch Church of Christ 37604 N. 1900 East Road Rossville, IL 60963.

The family of Richard "Dick" Reynolds created this Life Tributes page to make it easy to share your memories.

Send flowers to the Reynolds family.