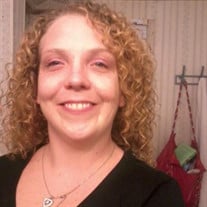 Rhonda Gayle Schramm, 38, of Indianapolis, IN, passed away at 11:00 A.M. Monday April 2, 2018 at Community Hospital East in Indianapolis, IN. She was born January 16, 1980, in Danville, IL, the daughter of Albert John “A.J.” Schramm and Jenny Gernand. She is survived by her mother, Jenny Gernand of Rossville, IL; two daughters, Maleah Morlan of Rossville, IL and Rhionna Johnson of Indianapolis, IN; one son, Robbie Haas of Bismarck, IL; one sister, Michelle (Eric) Overfelt of Greenwood, IN; one brother, Michael Matthews of Greenwood, IN; and several nieces and nephews. She was preceded in death by her father, Albert Schramm; and grandparents, Albert Wesley and Nadene Schramm and Harold and Adeline Gernand. Rhonda loved her family. She had a soft heart and also loved her animals. You could always go to her home and see a pet that she had taken in. Cremation rites have been accorded, and a visitation will be held 11:00 A.M. – 12:00 P.M. Saturday April 14, 2018 at Anderson Funeral Home. A memorial service will follow the visitation and will begin at 12:00 P.M. Saturday at the funeral home, with Rev. Matt Stump officiating. Burial will be held at a later date. Memorials may be made to the donor’s choice.

The family of Rhonda Gayle Schramm created this Life Tributes page to make it easy to share your memories.

Rhonda Gayle Schramm, 38, of Indianapolis, IN, passed away at...

Send flowers to the Schramm family.