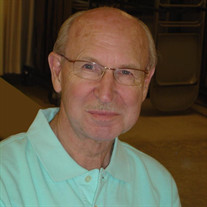 Rex E. Wilson, 83, of Hoopeston, IL, passed away at 10:10 A.M Wednesday February 2, 2022, at Arbor Rose of Monticello. He was born during a big snowstorm on March 6, 1938, at the family home in Bismarck, IL, the son of Ray C. and Grace Belle (White) Wilson. He married Orla L. Roberts on October 7, 1960, in Iroquois County, IL. She survives. He is also survived by one daughter, Renee (Tim) Noice of Monticello, IL; one son, Bob (Connie) Wilson of Hoopeston, IL; three granddaughters, Andrea (Josh) Stark of Armstrong, IL, Alex (Matt) Endres of Sauk City, WI, and Natalia Noice of Monticello, IL; three great grandchildren, Jocelyn and Jonah Stark and Roman Ray Endres; and one brother, Alvin (Leona) Wilson of Bismarck, IL. He was preceded in death by his parents; one daughter, Darla Renee Wilson; four sisters, Catherine, Ruth, Elsie, and June; and two brothers, Dean and George. Rex graduated from John Greer High School in 1956 where he later served on the reunion planning committee for many years. He worked at Radio Condenser/TRW and later at FMC in Hoopeston for thirty years. After retirement, he worked as a janitor for Hoopeston schools for nineteen years. Rex was a member of the Chestnut Street Church of Christ since 1967 where he performed every Sunday night for over twenty years at the Sunday night gospel service. He also served on many church committees as well as president of the board for multiple terms throughout his time there and was instrumental in the completion of the original plans for the church structure by overseeing the construction of the fellowship hall and classrooms. Throughout the years, Rex shared his talent of singing and playing his guitar at over seventy-five funerals. Devoted to helping others, he and his wife, Orla, volunteered their time delivering “Meals on Wheels”. He was a member of the National Birmingham Roller Club raising Domesticated Roller Pigeons since the age of six. He appreciated all wildlife and enjoyed feeding and watching birds. Rex was an avid antique marble collector and loved growing flowers and gardening. A visitation will be held 10:00 A.M. -12:00 P.M. Friday February 11, 2022, at Anderson Funeral Home, 427 E. Main St. Hoopeston, IL. The funeral service will follow the visitation and will begin at 12:00 P.M. Friday at the funeral home with Rev. Gary Milton and Rev. Bud McMasters officiating. Burial will follow in Gundy Cemetery in Bismarck, IL. Memorials may be made to H.A.R.T (Hoopeston Animal Rescue Team), 901 W. Main St. Hoopeston, IL 60942.

The family of Rex E. Wilson created this Life Tributes page to make it easy to share your memories.

Send flowers to the Wilson family.