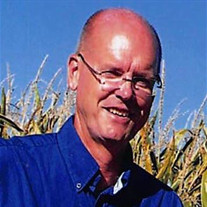 Randall Lawrence “Randy” Weber, 60, of Ambia, IN, passed away at 12:26 P.M. Saturday January 27, 2018 in Hoopeston, IL. He was born February 14, 1957, in Lafayette, IN, the son of Leon and Gertrude (Luekefeld) Weber. He married Christian Teare on September 1, 1979 in Champaign, IL. She survives in Ambia, IN. He is also survived by one son, Karl Weber of Ambia, IN; one sister, Janet (John) Deaton of Claypool, IN; one brother-in-law, Martin (Tracy) Teare of Rankin, IL; his father-in-law, Phillip Teare of Danville, IL; 4 nieces; and 2 nephews. He was preceded in death by his parents. Randy had a life-long passion for farming and was an extremely hard worker. He was a member of The Church of Jesus Christ of Latter-Day Saints. His greatest enjoyments were target shooting and helping his son, Karl, with his racing. A visitation will be held 10:00 A.M. – 1:00 P.M. CST on Wednesday January 31, 2018 at Anderson Funeral Home 427 E. Main St. Hoopeston, IL. The funeral service will follow the visitation and will begin at 1:00 P.M. CST Wednesday at the funeral home, with Bishop Benjamin Crockett officiating. Burial will follow in Floral Hill Cemetery in Hoopeston. Memorials may be made to the Donor’s Choice.

The family of Randall Lawrence "Randy" Weber created this Life Tributes page to make it easy to share your memories.

Send flowers to the Weber family.