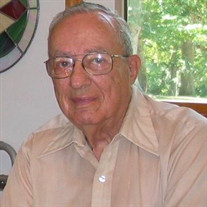 Ralph Vernon Stockwill, 92, of Potomac, IL, passed away at 9:02 A.M. Monday January 22, 2018 at Carle Foundation Hospital in Urbana, IL. He was born August 11, 1925, in Rossville, IL, the son of Ralph P. and Golda Mae (Pettice) Stockwill. He married Anna Lorraine Rumble on July 12, 1946, in Hoopeston, IL. She preceded him in death. He is survived by one daughter, Connie (David) Johnson of Charlotte, TN; three sons, Robert Stockwill of Danville, IL, Loran Stockwill of Armstrong, IL, and Joe Stockwill of Hoopeston, IL; one sister, LaVonne “Dutchy” (Lynn) Getchel; one brother, Richard (Betty) Stockwill; 11 grandchildren; 27 great-grandchildren; and many nieces and nephews. He was preceded in death by his parents; one infant daughter, Diana Lorraine Stockwill; and one grandson, Robert Jeffrey Stockwill. Ralph worked at American Can in Hoopeston for over 42 years, until his retirement. He served in the United States Navy. He enjoyed boating, traveling with his wife in their motorhome, and spending time with his family. A visitation will be held 4-6:00 P.M. Thursday January 25, 2018 at Anderson Funeral Home 427 E. Main St. Hoopeston, IL. The funeral service will be held at 11:00 A.M. Friday January 26, 2018 at the funeral home, with Pastor Dan Hunt officiating. Burial will follow in Gundy Cemetery in Bismarck, IL. Military rites will be accorded by the Hoopeston American Legion Post 384. Memorials may be made to the donor’s choice.

The family of Ralph Vernon Stockwill created this Life Tributes page to make it easy to share your memories.

Send flowers to the Stockwill family.