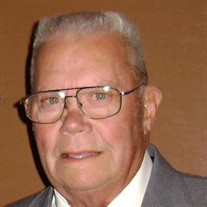 Ralph V. Lewis, 84, of Hoopeston, IL, passed away at 1:43 A.M. Tuesday May 5, 2015 at Carle Foundation Hospital in Urbana, IL. He was born January 9, 1931, in Sibley, IL, the son of Wilbur and Stella Lewis. He married Barbara Garner on December 22, 1956 at the Ambia Methodist Church. She survives in Hoopeston. He is survived by one daughter, Lea Ann (Ricky) Lile; one son, Doug (Tammy) Lewis, both of Hoopeston, IL; one brother, Ronald (Marsha) Lewis, of Hoopeston, IL, four grandchildren, Alisha, Justin, P.J., and Summer, three great grandchildren, Kingston, Bentley, and Ava; two nieces, Sherry Goodrum and Vicky Lewis; one nephew, Bruce Wells. He was preceded in death by his parents; one sister, Phyllis Wells; one brother-in-law, Dallas Wells; one grandchild, Marcie Jo Lewis. In his early years, Ralph grew up on a farm by Goodwine, IL. He worked summers and weekends doing farm work. He graduated from Milford High School in 1949. He joined the Navy in 1951 and served aboard an aircraft carrier during the Korean War. Ralph was a 2nd class gunner’s mate and served four years in the Navy. Upon returning from the Navy he worked at FMC as a welder, welder foreman, and in the experimental department. In his later years he worked as an industrial engineer. During his life, Ralph was an avid golfer. He loved having cookouts on Sunday afternoons and gathering around the swimming pool with family and friends. He prided himself on his cooking abilities. Ralph had a passion for having a great looking lawn and garden. He also loved sports, was a lifelong Cubs fan, and never missed a NASCAR race. He managed a little league baseball team for several years. Ralph was a lifetime member of the VFW and American Legion. He served as a Vice Commander at the VFW. Ralph never met a stanger and he loved to visit. A visitation will be held 11:00 A.M. – 1:00 P.M. Friday May 8, 2015 at Anderson Funeral Home 427 E. Main St. Hoopeston. The funeral service will follow the visitation at 1:00 P.M. Friday May 8, 2015 at the funeral home, with Pastor Micah Mobley officiating. Burial will be at Floral Hill Cemetery in Hoopeston, with military rites being accorded by the Hoopeston American Legion and VFW Posts. Memorials may be made to the Disabled Veterans National Foundation 1020 19th St. NW Suite 475 Washington, DC 20036.

Ralph V. Lewis, 84, of Hoopeston, IL, passed away at 1:43 A.M. Tuesday May 5, 2015 at Carle Foundation Hospital in Urbana, IL. He was born January 9, 1931, in Sibley, IL, the son of Wilbur and Stella Lewis. He married Barbara Garner on December... View Obituary & Service Information

The family of Ralph V. Lewis created this Life Tributes page to make it easy to share your memories.

Send flowers to the Lewis family.