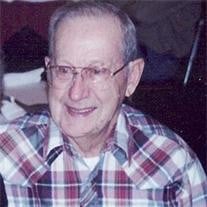 Ralph Everett Goble, 85, of Danville, IL, passed away at 1:24 P.M. Wednesday, February 15, 2012 at his home in Danville, IL. He was born October 28, 1926, in Danville, IL, the son of John A. and Rose (Waroquier) Goble. He married Catherine A. Hawkins on December 5, 1948 at the Lone Oak Church of Christ in Danville, IL. She survives in Danville. Other survivors include; four daughters, Karen Luse of Westville, Debra (Dennis) Mercer of Rantoul, IL, Sue (Roger) Reed of Hoopeston, IL and Teena (Steve) Sprague of Danville, IL; three sons, David (Glenda) Gobleof Rankin, IL, Kenny (Becky) Goble of Bismarck, IL and Harold (Peggy) Goble of Rossville, IL; two sisters, Dorothy Gray of Danville, IL and Joan Switzer of Catlin, IL; two daughters-in-law, Patty Strawser and Rachel Goble. He is also survived by many grandchildren and great-grandchildren, numerous nieces and nephews and a special friend Ron Wernigk. Ralph is preceded in death by his parents, two brothers John and Raymond Goble and two sons Melvin and John Goble. Ralph ran a milk route for several years, before farming in the Riley area. He later worked at the Riley Elevator and then FMC in Hoopeston, where he retired. He served in the United States Army from 1945 - 1947. He attended the Lone Oak Church of Christ in Danville. Ralph enjoyed spending time with his family and friends and working in his workshop.

The family of Ralph Goble created this Life Tributes page to make it easy to share your memories.

Send flowers to the Goble family.