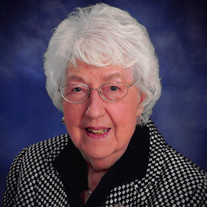 Pauline A. Klein, 89, of Hoopeston, IL, passed away at 9:25 A.M. on Friday January 25, 2019. She was born February 1, 1929, in Rossville, IL, the daughter of Ruel and Hazel (Stump) Abbott. She married Werner Klein on October 10, 1959, at the Travis Air Force Base Chapel in San Francisco, CA. He preceded her in death. She is survived by two daughters, Heidi Crouch of Hoopeston, IL and Annalisa Klein – Bassett and Jeff Bassett of Charleston, SC; one sister-in-law, Fran Abbott; one granddaughter, Samantha (Matt) Haertjens; one grandson, Nathan Crouch; and many nieces and nephews who she loved very much. She was preceded in death by her parents; one sister, Hester Abbott; and eight brothers, Harold (Grace) Abbott, Howard (Grace) Abbott, Herschel (Martha) Abbott, Harlan Abbott, Homer Abbott, Hollis (Beverly) Abbott, Dick (Shirley) Abbott, and Jack Abbott. Pauline was a graduate of East Lynn High School and later became a homemaker. She was a member of the Rossville Church of Christ, the Eastern Star, and the Red Hat Society. She enjoyed crocheting, painting, quilting, and sewing. Pauline also enjoyed crafting, reading, and most of all she loved to dance. Pauline was a resident at Autumn Fields in Hoopeston and loved everyone there very much. A visitation will be held 11:00 A.M. – 1:00 P.M. Wednesday January 30, 2019 at Anderson Funeral Home 427 E. Main St. Hoopeston, IL. The funeral service will follow the visitation and will begin at 1:00 P.M. Wednesday at the funeral home with Pastor Kevin Purdy officiating. Burial will follow in Floral Hill Cemetery in Hoopeston. In lieu of flowers, memorials may be made to the Rossville Church of Christ 514 E. Attica St. Rossville, IL 60963.

The family of Pauline A. Klein created this Life Tributes page to make it easy to share your memories.

Send flowers to the Klein family.