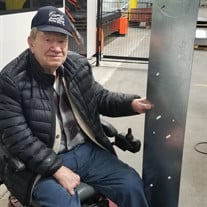 On February 27, 2019, Paul Sidney Greene (94) of East Lynn/Hoopeston, Illinois left this world to join his wife Cynthia and be with Jesus. He was born on September 6, 1924 in Washington, IN to David Hershel and Consuella Venus (Morris) Greene. He is preceded in death by his wife Cynthia Ann (Winslow) of 65 years, both of his parents, and his 3 brothers (Morris, Ralph, and Bill). Surviving are his sister, Betty Meyer, and his lineage of 5 children, 16 grandchildren, and 23 great-grandchildren. He deeply loved his family. Paul and Cynthia were married in Fairmount, IN on the Winslow family farm on October 12, 1947. They began their lives together in Washington, IN then moved in 1949 to the family farm in East Lynn, IL where they raised their 5 children: Rev. Robert (Sue-deceased, Maureen) Greene of Vermont IL, Marilyn (Lester) Maul of Rankin IL, David (Cheryl) Greene of Temple Terrace FL, Rex (Rhoda) Greene of Watseka IL, and Susan Hoffman of Longview TX. In the 60’s he purchased the blacksmith shop in East Lynn and started Greene Welding & Hardware. When the East Lynn School closed in the 70’s, Paul purchased the school grounds to move his expanding business. The business designed and began to manufacture the binstairs in 1976 and has expanded the grain bin safety equipment line which is sold throughout the world. Paul was forced into retirement at the age of 70 with a stroke. Reluctantly, he turned his beloved business over to his son, Rex, to continue his legacy. After retirement, he stayed involved in the business. His primary concern was taking care of Cynthia, who was afflicted with rheumatoid arthritis. He desired all memorial gifts to go to The Arthritis Foundation to help people who suffered like the love of his life. Please donate at www.arthritis.org or 1355 Peachtree St. NE, Suite 600, Atlanta GA 30309. Throughout the years, he was an active member at both East Lynn UMC and Hoopeston UMC, a volunteer fireman in East Lynn, and a member of Gideons International. He loved to travel and play games. Often, you would find that he was the life of the party. His love for people shone brightly. Paul was a problem solver at heart, and always had ideas for new solutions. He was an inventor his entire life and was always very resourceful and ingenious in fixing problems. Following his stroke, his mind stayed sharp until the end. Visitation will be held from 2:00-5:00 P.M. Sunday March 3, 2019 at Anderson Funeral Home 427 E. Main St. Hoopeston, IL. The funeral service will be held at 11:00 A.M. Monday March 4, 2019 at the funeral home, with Rev. Larry Houseman officiating. Burial will follow in Floral Hill Cemetery in Hoopeston.

On February 27, 2019, Paul Sidney Greene (94) of East Lynn/Hoopeston, Illinois left this world to join his wife Cynthia and be with Jesus. He was born on September 6, 1924 in Washington, IN to David Hershel and Consuella Venus (Morris) Greene.... View Obituary & Service Information

The family of Paul S. Greene created this Life Tributes page to make it easy to share your memories.

Send flowers to the Greene family.