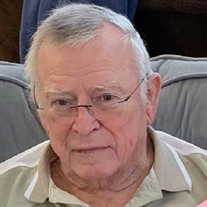 Orville M. Haxton, 78, of Hoopeston, IL, passed away at 5:20 P.M. Thursday March 25, 2021 at his home. He was born December 10, 1942, in Milford, IL, the son of LeRoy Haxton and Lilian (Vernon) Buhrmester. He married Donna Gay Mitchell on October 6, 1979, in East Lynn, IL. She preceded him in death on July 9, 2014. He is survived by two daughters, Tracy (Bob) Whitis of Surprise, AZ and Rebecca McKenzie of California; one step-daughter, Betsy (Dan) Smith of Tuscola, IL; one son, Eric Haxton of Surprise, AZ and one step-son, Scott (Sharon) James of Catlin, IL; two sisters, Judy (Wayne) Frederick of Hoopeston, IL and Glenda Evans of Lexington, KY; one brother, Jim (Linda) Buhrmester of Milford, IL; fourteen grandchildren; and many nieces and nephews. In addition to his wife, he was preceded in death by parents; one sister, Peggy Brammer; and one brother, Harvey Haxton. Orville worked at Essex in Hoopeston and later worked at Pillsbury as inventory/quality control for many years. He served in the United States Army. He attended the Milford Christian Church and was a member of the Hoopeston Rotary Parents of Exchange. Orville enjoyed playing cards, collecting model cars, and loved making woodworking items for his grandchildren. He also enjoyed bowling and was inducted into the Hoopeston Bowling Hall of Fame. A visitation will be held 11:00 A.M. – 12:00 P.M. Wednesday March 31, 2021 at Anderson Funeral Home 427 E. Main St. Hoopeston, IL. The funeral service will follow the visitation and will begin at 12:00 P.M. Wednesday at the funeral home with Pastor Brent Zastrow officiating. Burial will follow in Floral Hill Cemetery in Hoopeston with military rites being accorded by the Cissna Park American Legion Post #527. Memorials may be made to the Hoopeston Animal Rescue Team 901 W. Main St. Hoopeston, IL 60942.

The family of Orville Haxton created this Life Tributes page to make it easy to share your memories.

Send flowers to the Haxton family.