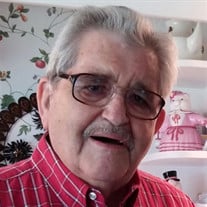 Ollie Dwayne Bailey, 86, of Hoopeston, IL, passed away at 7:15 P.M. Thursday August 4, 2016 at Carle Hoopeston Regional Health Center in Hoopeston. He was born December 16, 1929, in Goodwine, IL, the son of William and Ella (Lewis) Bailey. He married Peggy Ann Hedgecock on September 23, 1951 at the First Church of the Nazarene. He is survived by his loving wife of 64 years, Peggy; two sons, Rodney D. and Roselyn (Miller) Bailey of Gilbert, AZ and Phil D. Bailey of Hoopeston, IL; daughter-in-law, Carla Bailey of Danville, IL; one sister, Shirley (Rex) Counseller of Topeka, KS; three grandchildren, Masen Norton, Phil Bailey Jr. and Summer Bailey; two great-grandchildren, Bentley Smothers and Kaisley Bailey and several nieces and nephews. He was preceded in death by his parents; one son, Brad Bailey; seven sisters and two brothers. Ollie was a meat cutter for 54 years, before retiring from County Market in 1999. Over the years, he received many sales and performance awards in the meat cutting industry. He served four years in the United States Air Force from 1951-1955. He was a member of the Hoopeston Community Church of the Nazarene, where he was also the Sunday school superintendent for twenty-five years and a church board member for 35 years. Ollie enjoyed working in his yard and loved watching Bobby Knight coach. He also enjoyed journaling every day. A visitation will be held 4:00 – 7:00 P.M. Monday August 8, 2016 at Anderson Funeral Home 427 E. Main St. Hoopeston, IL. The funeral service will be at 11:00 A.M. Tuesday August 9, 2016 at the Hoopeston Community Church of the Nazarene 402 E. Honeywell Ave. Hoopeston, IL, with Pastor Jeff Alexander and Robert Norris officiating. Burial will follow in the Floral Hill Cemetery, with military rites being accorded by the Hoopeston American Legion Post #384 and the VFW Post #4826. Memorials may be made to the Hoopeston Community Church of the Nazarene 402 E. Honeywell Ave Hoopeston, IL 60942.

The family of Ollie Dwayne Bailey created this Life Tributes page to make it easy to share your memories.

Send flowers to the Bailey family.