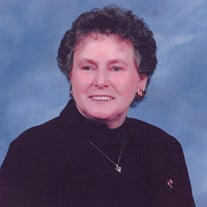 Norma Lee Cox, 80, of Hoopeston, IL, passed away at 7:50 A.M. Friday April 6, 2018, at her home. She was born September 26, 1937, in Hoopeston, IL, the daughter of Jesse and Ruby (Shields) Moore. She married Charlie H. Cox on February 15, 1992. He preceded her in death. She is survived by one daughter, Brenda (Steve) Holland of Hoopeston, IL; four sons, Terry (Cheryl) Mullen of Williamsport, IN, Robert (Kathy) Mullen of Sturgis, MI, Greg Mullen of Fort Lauderdale, FL, and Tim (Rene`) Mullen of Monticello, IN; one sister, Donna Moore of Hoopeston, IL; 16 grandchildren; and 29 great-grandchildren. She was preceded in death by her parents; and four brothers, Bob Philips, Walter Moore, Gary Moore, and Marvin Butch Moore. Norma worked at Scranton’s in Hoopeston. She later worked at CBS and then Publix Food and Pharmacy until her retirement. She was a member of the Hoopeston United Methodist Church, where she was also a member of the United Methodist Women. Norma enjoyed volunteering for Meals on Wheels, cooking, bowling, and making crafts. She also enjoyed traveling, taking walks, and loved spending time with her family. Cremation rites will be accorded. A visitation will be held 10:00 – 11:00 A.M. Wednesday April 11, 2018 at the Hoopeston United Methodist Church 403 E. Main St. Hoopeston, IL. A memorial service will follow the visitation and will begin at 11:00 A.M. Wednesday at the church, with Pastor Cathy Najmon officiating. Burial will follow in Floral Hill Cemetery. In lieu of flowers, memorials may be made to Carle Hospice 611 W. Park St. Urbana, IL 61801.

The family of Norma Lee Cox created this Life Tributes page to make it easy to share your memories.

Send flowers to the Cox family.