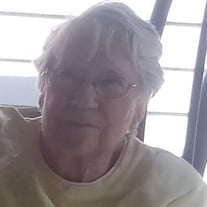 Nancie Loretta Hardwick, 85, of Hoopeston, IL, passed away at 1:00 P.M. Monday June 21, 2021, at Heritage Health Therapy and Senior Living in Hoopeston. She was born at home on March 24, 1936, in Iroquois, IL, the daughter of Samuel and Wanda (Adwell) Ingram. She married James E. Hardwick on August 20, 1965. He preceded her in death. She is survived by one daughter, Betty (Steve) Comstock of Hoopeston, IL; four sons, Ed (Robin) Sanford of Rantoul, IL, Bill Sanford of Hoopeston, IL, Carl (Marla) Sanford of Hoopeston, IL, and Brian (Diane) Snyder of Aurora, IL; one sister, Denise Rebston of New Port Richey, FL; one brother, Chuck (Gloria) Ingram of Benton, IL; sister-in-law, Carole Ingram of Hoopeston, IL; 18 grandchildren; 33 great-grandchildren; and many nieces and nephews. In addition to her husband, she was preceded in death by her parents; daughter, Anita Meyer; sister, Dorothy Johnson; three brothers, Samuel, Wendell, and James Ingram; brother-in-law, George Rebston; and granddaughter, Robin Sanford. Nancie worked at Schumacher Electric in Hoopeston for over 30 years until her retirement. She attended the First Church of God in Hoopeston where she helped with Vacation Bible School. She volunteered for Meals on Wheels and sat with the elderly. Nancie enjoyed shopping, playing euchre with her friends, attending senior dances at the Hoopeston Multi Agency, and spending time with her family and grandchildren. A visitation will be held 10:00 – 11:00 A.M. Friday July 9, 2021, at Anderson Funeral Home 427 E. Main St. Hoopeston, IL. The funeral service will follow the visitation and will begin at 11:00 A.M. Friday July 9, 2021, at the funeral home. Burial will follow in Floral Hill Cemetery in Hoopeston. Memorials may be made to the Hoopeston First Church of God or the Alzheimer’s Association.

Nancie Loretta Hardwick, 85, of Hoopeston, IL, passed away at 1:00 P.M. Monday June 21, 2021, at Heritage Health Therapy and Senior Living in Hoopeston. She was born at home on March 24, 1936, in Iroquois, IL, the daughter of Samuel and Wanda... View Obituary & Service Information

The family of Nancie Loretta Hardwick created this Life Tributes page to make it easy to share your memories.

Nancie Loretta Hardwick, 85, of Hoopeston, IL, passed away at...

Send flowers to the Hardwick family.