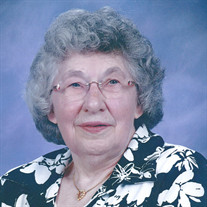 Nadine Louise Odle, 93, of Chandler AZ formerly of Hoopeston Illinois passed away at the Christian Care Oasis in Mesa Arizona on April 1, 2017. Nadine was born in Crawfordsville, Indiana on April 6, 1923, the third daughter of Clifford George Dice and Tressa Leona (Duffin) Dice. She lived her early years in the rural area around Hoopeston, Illinois and then graduated from John Greer High School in 1942. Two years later, she married Clarence Benjamin Odle on September 6, 1943. He preceded her in death in 1950. She is survived by one daughter, Janet K. Odle of Chandler, AZ, one son Clarence B. Odle Jr. (Ben) and his wife Elizabeth and one grandson Nathan B. Odle all of Thousand Oaks CA. Nadine is also survived by numerous nieces and nephews in Illinois and across the United States. They include: Charlotte Quick, Ron Dice, Don Dice, Dan Dice, Jeanne Magrini, Dennis Dice , Leonard Wiese, Harold Wiese, Joyce Anibali, and Lynn Wiese; Shirley Cunningham, Linda Sambenedetto, Kevin Odle, Norma May, Harold Kinder, Ken Kinder, Robert Kinder, Joy Gaddis, Rhoda Carter, Ron Griffith, Betty Lou Griffith, Don Odle, Roger Odle, Steve Odle, Tom Odle, Charles Odle Jr, Rebecca Kesler, Jim Odle, Melvin Odle Jr, Sara Matthewson, Jeff Odle, Maurice Odle, Judy Miller, Carol Miller, Anna Miller, Leroy Miller, and Robert Miller. Nadine was preceded in death by both parents, two sisters: Maxine Wiese of Lombard, IL and Margene Echard of rural Hoopeston, and two brothers: Harold Dice of rural Hoopeston and Howard Dice of rural Bismarck, Illinois. After Nadine’s high school graduation, she worked at FMC as a secretary until she married Clarence Odle. Then she moved to Rantoul with him, since he was stationed at Chanute Air Force Base. During the next few years, she traveled with her husband to several locations across the country with the US Air Force. After Clarence was killed in the Korean War in 1950, she completed the house they were building on Elm Street in Hoopeston. During the next few years, she raised her two children and then returned to work. Her jobs included Hixson Insurance and FMC Corporation in Hoopeston. Later she worked at the Vermilion County Clerk’s office in Danville. After her children graduated from high school, she accepted a job at the State Superintendent of Public Instruction office in Champaign. During those years, she also took classes at Parkland College and the University of Illinois so she could get certified to follow her passion for teaching. In the early 1970’s she opened her own preschool (Alpha Academy) in Hoopeston. For the next 25 years, she taught many children in her own classroom on Elm Street. Her greatest joy was to see her students get excited about learning. After her retirement, Nadine moved to Sun Lakes Arizona in 2003 to be nearer to her children. Nadine was a member of the First Church in Hoopeston, the King’s daughter Group, and the church choir. She was also active in the Hoopeston Library Club, the American Legion Auxiliary, and the Gold Star Wives, the Beta Sigma Phi Sorority and the Business and Professional Women’s club and Hoopeston Historical Society. In the early 1950’s, she served as a Chaperon for the annual Hoopeston Sweet Corn Festival for two years. Later, she was instrumental in soliciting funds for the Hoopeston Community Hospital. Nadine also enjoyed politics and often volunteered to drive people to the polls for many years. Her visitation will be 4:00 – 7:00 P.M. Wednesday April 19, 2017 at the Anderson Funeral Home 427 East Main Street in Hoopeston. Illinois. The funeral service will be at 11:00 AM Thursday April 20, 2017 at the First Christian Church Disciples of Christ in Hoopeston with the Reverend Tom Cici officiating. Her burial will immediately follow at the Floral Hill cemetery. Memorials may be made in Nadine’s honor to the First Christian Church in Hoopeston, the Hoopeston Public Library, the American Legion Auxiliary, the Hoopeston Historical Society or PBS.

Nadine Louise Odle, 93, of Chandler AZ formerly of Hoopeston Illinois passed away at the Christian Care Oasis in Mesa Arizona on April 1, 2017. Nadine was born in Crawfordsville, Indiana on April 6, 1923, the third daughter of Clifford George... View Obituary & Service Information

The family of Nadine Odle created this Life Tributes page to make it easy to share your memories.

Send flowers to the Odle family.