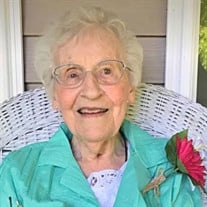 Mildred Langdoc, 99, of Hoopeston, IL, passed away at 6:48 P.M. Tuesday November 17, 2020 at her home. She was born June 10, 1921 in Wren, OH, the daughter of Horace and Harriett (Dull) Hudspeth. She married Robert E. Langdoc on August 20, 1944 in Danville, IL. He preceded her in death. She is survived by one daughter, LaVeda Sutton of Pensacola, FL; two sons, Gary R. Langdoc of Hoopeston, IL and Gaylen Kent (Billie Sue) Langdoc of Bloomingdale, IN; 5 grandchildren, Robert Langdoc, Michele Lohmeyer, Rachele (Matt) Parsons, Kelly Langdoc, and Bryan (Maureen) Langdoc; 10 great-grandchildren, Hannah Trombley, Matthew and Maya Parsons, Rosa (Jack) Hill, Sara, Eugenio, Clare, Basil, William, and Ignatius Langdoc; and many nieces and nephews. In addition to her husband, Mildred was preceded in death by her parents; one daughter, LaRee Lohmeyer; three sisters, Martha Jones, Marcile Chesnut, and Georgianna Wilds; and one brother, Calvin Hudspeth. During Mildred’s grade school years, she won the state penmanship award for the state of Oklahama in which she was always very proud of. She was a homemaker most of her life, caring for her family. She later worked in the office at Vermilion Iron and then at City National Bank before her retirement. She was a member of the Hoopeston United Methodist Church, where she also belonged to the United Methodist Women. Mildred was a former member of the Hoopeston American Legion Auxiliary and the Hoopeston Hospital Auxiliary. She enjoyed spending time with her family and friends, going out for coffee, playing games, and sewing. Per her wishes, she will be cremated, and a private graveside service will be held. A memorial service will be held at a later date. Memorials may be made to the Hoopeston United Methodist Church 403 E. Main St. Hoopeston, IL 60942.

The family of Mildred Langdoc created this Life Tributes page to make it easy to share your memories.

Send flowers to the Langdoc family.