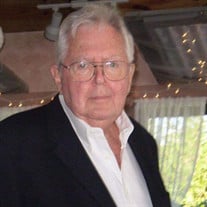 Michael “Mike” Warden Ward passed away at 7:25 A.M. Tuesday April 17, 2018 at Heritage Health Therapy and Senior Living in Hoopeston, IL, at the age of 94. He was born June 26, 1923 in Brighton, England and came to this country with his mother, Ivy Ward, at the age of four. He was orphaned at age twelve and raised by friends of his mother in Geneseo, New York. He graduated from Geneseo High School, and was a graduate of Dartmouth College of Hanover, New Hampshire with a degree in Business. He also served in the United States Navy as a lieutenant, j.g. Administration. His career was spent entirely in the Food Processing Industry. Mike was a plant manager with the Bird’s Eye Frozen Goods division in Avon, New York. He worked in sales and marketing management with FMC Corp., as well as BFM Machinery Corp. in Illinois and Wisconsin. He represented the Dutch company, Stork Amsterdam in the sale of large processing systems in the United States for ten years before retiring in 1996. Following retirement, he and his wife Jane spent their time between Holmes Beach, FL and Hoopeston. Mike had been a Rotarian in New York and Illinois. He was a past Commander of the American Legion Post #294 in Avon, N.Y., and a member of Post #384 in Hoopeston for many years. He was preceded in death by his first wife, Mary Ann and daughter, Martha Ann, as well as his second wife, Jane Verbeke Ward. Survivors include three children, Steve (Mary Jean) Ward of Millersville, MD, Susan (the late Mark) Drollinger of Hoopeston, IL, and Daniel (Charlotte) Ward of Pomona, IL; four step-children, Allen (Georgine) Verbeke of Hillsdale, IL, Steve (Linda) Verbeke of Silvis, IL, Denise (Michael) Sheppard of Champaign, IL, and Michael (Maria) Verbeke of Rossville, IL; as well as numerous grandchildren and great-grandchildren. Per his wishes, he was cremated, and a graveside service will be held at 2:00 P.M. Saturday May 5, 2018 at Floral Hill Cemetery in Hoopeston, IL, with Pastor Bruce McQuigg officiating. Military rites will be accorded by the Hoopeston American Legion Post #384. A celebration of life will be held at the Hoopeston American Legion following the graveside service. In lieu of flowers, memorials may be made to the Special Olympics (Jane’s favorite charity) 605 E. Willow St. Normal, IL 61761, or to a charity of the donor’s choice.

The family of Michael "Mike" Warden Ward created this Life Tributes page to make it easy to share your memories.

Send flowers to the Ward family.