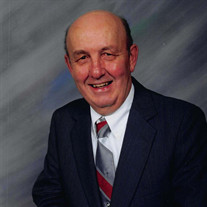 Michael Raymond “Mick” Farrell, 74, of Hoopeston, IL., passed away at 6:43 A.M. Friday, February 23, 2018 at Carle Hoopeston Regional Health Center. He was born May 16, 1943 in Prairie Green Township, IL, the son of Raymond and Marjorie (Boltz) Farrell. He married Ruby Nell Hunter on February 26, 1972 at St. Anthony Catholic Church in Hoopeston. She survives in Hoopeston. He is survived by one daughter, Beth Ann (Jeremiah) Eyrich of Rossville, IL; two sisters, Doris (Tom) Long of St. Joseph, IL and Patricia Farrell of Hoopeston, IL.; one brother, Larry (Vickie) Farrell of Hoopeston, IL.; one grandson, Charlie Mick Eyrich; and several nieces and nephews. He was preceded in death by his parents. Mick owned and operated L & M Lunch with his brother, Larry, from December 20, 1965 to March 2008. He was a member of the United States Army and the Army Reserve for six years. He was also a member of the Hoopeston American Legion and St. Anthony Catholic Church. He enjoyed playing euchre with his euchre club, having coffee with his friends, and most of all loved spending time with his grandson. A visitation will be held 5:00 P.M. – 7:00 P.M. on Monday, February 26, 2018 at Anderson Funeral Home 427 E. Main St. Hoopeston, IL. 60942. The funeral mass will be held at 11:00 A.M. Tuesday, February 27, 2018 at St. Anthony Catholic Church, 423 S. 3rd St. Hoopeston, IL, with Father Ted Pracz officiating. Burial will follow at Floral Hill Cemetery in Hoopeston with military rites being accorded by the Hoopeston American Legion Post 384. Memorials may be made to the donor’s choice.

The family of Michael Raymond "Mick" Farrell created this Life Tributes page to make it easy to share your memories.

Send flowers to the Farrell family.