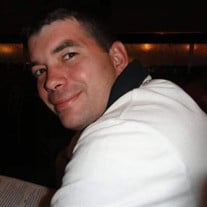 Michael Jay Dowell, 41, of Hoopeston, IL, passed away at 1:08 P.M. Friday September 3, 2021, at his home. He was born February 9, 1980, in Decatur, IL, the son of Roger Dowell Sr. of Florida and Sherry (Miguel) Murgas of Decatur, IL. In addition to his parents, he is also survived by one daughter, Caia Brotherton of Hoopeston, IL; four sons, Cameron, Coda, and Colton Brotherton of Hoopeston, IL and Easton Hood of Hoopeston, IL; one sister, Shawna Zuniga of Decatur, IL; three brothers, Roger (Aissa) Dowell Jr. of Georgetown, IL, Scott (Crystal) Dowell of Decatur, IL, and Rodney Dowell of Decatur, IL; maternal grandmother, Judy Helm of Decatur, IL; and several nieces and nephews. He was preceded in death by one son, Christopher Brotherton; his paternal grandparents; and his maternal grandfather. Michael worked at Teasdale Foods in Hoopeston for 18 years where he did maintenance work on machinery. He enjoyed riding his motorcycle, fishing, and doing any mechanical work. He especially enjoyed spending time with his children. Cremation rites have been accorded and no services will be held. Memorials may be made to the American SIDS Institute, 528 Raven Way, Naples, FL 34110.

The family of Michael Jay Dowell created this Life Tributes page to make it easy to share your memories.

Send flowers to the Dowell family.