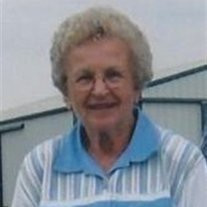 Maxine Williams, 89, of Hoopeston, IL, passed away at 7:00 P.M. Wednesday December 4, 2013 at her home at Autumn Fields Adult Community in Hoopeston. She was born June 3, 1924 near Hoopeston, IL, the daughter of Roy T. and Ruth (Crain) Lee. She married Russell Williams on August 27, 1942 in East Lynn, IL. He preceded her in death. She is survived by one daughter, Sherry (Larry) Johnson of East Lynn; two sons, Tom (Sandy) Williams of Watseka, IL and Terry (Jacci) Williams of Potomac, IL; one daughter-in-law, Joyce Williams of Hoopeston, IL; one sister, Lois (Richard) Cantwell of Spencer, IN and one sister-in-law, Doris Knapp of Cissna Park, IL. She is also survived by six grandsons, Chad, Brad and Roy Johnson and Matt, Brian and David Williams, 11 great-grandchildren and many nieces and nephews. She was preceded in death by her parents; one son, Larry Williams; two brothers, Charles Lee and Franklyn (Ty) Lee and three sisters, Irma McNeely, Mary Hatfield and infant sister Lena Catherine Lee. Maxine graduated from East Lynn High School in 1942. Later that year, she married her husband Russell and became a housewife and helped work on the farm. After becoming a mother of four children, she sold Tupperware and Merle Norman Cosmetics. Maxine later worked for Blue Cross and Blue Shield, as the office manager of the Vermilion County office. She was a member of the Hoopeston United Methodist Church. She also served as a past board member of the East Lynn United Methodist Church and was the past head chaperone of the Hoopeston Sweetcorn Festival Sweetheart Pageant. Maxine enjoyed being with her grandchildren, bowling and playing cards, especially with the pinochle club that she and her husband played in for nearly 60 years. In lieu of flowers, memorials may be made to the donor’s choice in Maxine’s memory.

Maxine Williams, 89, of Hoopeston, IL, passed away at 7:00 P.M. Wednesday December 4, 2013 at her home at Autumn Fields Adult Community in Hoopeston. She was born June 3, 1924 near Hoopeston, IL, the daughter of Roy T. and Ruth (Crain) Lee.... View Obituary & Service Information

The family of Maxine Williams created this Life Tributes page to make it easy to share your memories.

Send flowers to the Williams family.