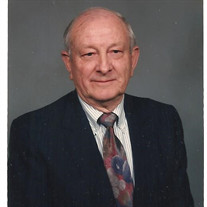 Max Lee Thomas, 90, of Rossville, IL, passed away at 1:40 A.M. Friday May 6, 2016 at Presence United Samaritans Medical Center in Danville, IL. He was born July 27, 1925 in Rossville, IL, the son of Cecil and Verda (Robling) Thomas. He married Winnie Houldridge on January 1, 1947 in Villa Grove, IL. She survives in Rossville. He is also survived by one daughter, Katherine (Steve) Layden of Oakwood, IL; one son, Steve Thomas (Keven Roth) of Victor, MT; one sister, Kay Ritter of Rossville, IL; one sister-in-law, Ruth Thomas of Rossville, IL; two grandchildren; five great-grandchildren; four nieces and seven nephews. He was preceded in death by his parents; two brothers, Larry and Allen Thomas and one nephew, Brian. Max worked as a photographer. He then painted pictures of farm buildings and houses and later worked as a rural mail carrier. He was a member of the Rossville Church of Christ, the Rossville Historical Society, was a past Rossville school board member, and was voted RCO Man of the Year in 2006. He enjoyed photography, traveling, Rossville history and sports, especially the Fighting Illini. Max loved his family and grandchildren and enjoyed spending time with them. Per his wishes, he will be cremated and a visitation will be held 4:00 – 7:00 P.M. Thursday May 12, 2016 at the old Rossville Grade School Gym 351 N. Chicago St Rossville, IL. A memorial service will be held at 11:00 A.M. Friday May 13, 2016 at his home located at 15722 E. Attica St. Rossville, IL, with Pastor Joe Hughes officiating. His ashes will be scattered at the family farm. Memorials may be made in Max’s honor to the Rossville Historical Society 103 W. Attica St Rossville, IL 60963 or to the donor’s choice.

Max Lee Thomas, 90, of Rossville, IL, passed away at 1:40 A.M. Friday May 6, 2016 at Presence United Samaritans Medical Center in Danville, IL. He was born July 27, 1925 in Rossville, IL, the son of Cecil and Verda (Robling) Thomas. He married... View Obituary & Service Information

The family of Max Lee Thomas created this Life Tributes page to make it easy to share your memories.