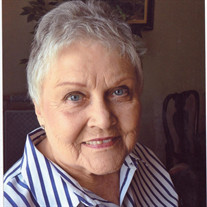 Mary Ellen Wonderlin, 78, of Hoopeston, IL, passed away at 3:30 P.M. Sunday, April 9, 2017, at her home. She was born March 28, 1939, the daughter of Earl and Bernice (Smith) Cox. She married Thomas Wonderlin on April 28, 1961 in Bismarck, IL. He preceded her in death on November 5, 1991. She is survived by her daughter, Laura (Kipling) Knox of Duvall, WA, her son Scot (Karilyn) Wonderlin of Mahomet, IL, and her grandchildren, Haley, Al, Meg and Julia Knox and Nicole, Katelyn and Dana Wonderlin. She was preceded in death by her parents. Mary was a laboratory technician at the Hoopeston Hospital in Hoopeston, IL and then later at the Lakeview Hospital in Danville, IL. She was a member of the First Presbyterian Church in Hoopeston. She was also a member of the Daughters of the American Revolution, PEO, and was in the Chime Choir at the Bismarck United Methodist Church. A visitation will be held 4:00 P.M. – 7:00 P.M. on Thursday, April 13, 2017 at the Anderson Funeral Home 427 E. Main St. Hoopeston, IL. The funeral service will be held at 10:00 A.M. on Friday, April 14, 2017 at the First Presbyterian Church 915 E. Orange St. Hoopeston, IL 60942 with Rev. Wade Meranda officiating. Burial will follow in Floral Hill Cemetery in Hoopeston, IL. Memorials may be made to the First Presbyterian Church 915 E. Orange St. Hoopeston, IL 60942 or to the Hoopeston Public Library 110 N 4th St. Hoopeston, IL 60942.

The family of Mary Ellen Wonderlin created this Life Tributes page to make it easy to share your memories.

Send flowers to the Wonderlin family.