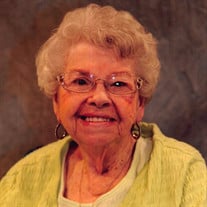 On August 20, 2018, Mary Jewell Wise, 92, of Hoopeston, passed away at Carle Foundation Hospital in Urbana, IL. She was a loving mother, grandmother and sister. Jewell was born on April 6, 1926 in Somerset, Kentucky, to Raymond and Nottie... View Obituary & Service Information

The family of Mary Jewell Wise created this Life Tributes page to make it easy to share your memories.

Send flowers to the Wise family.