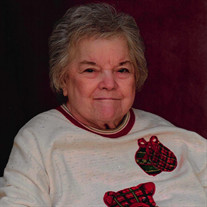 Mary Ann Umbanhowar, 74, of Rankin, IL, passed away at 2:56 P.M. Tuesday June 4, 2019 at Carle Hoopeston Regional Health Center. She was born June 25, 1944, in Salem, IL and was raised by Jim and Lavawn Forshier. She married Marvin Umbanhowar on September 22, 1962, at the Hoopeston United Methodist Church. He survives in Rankin. She is also survived by two daughters, Jamie (Mark) Reynolds of Champaign, IL and Beth (Phil) Gummere of San Antonio, TX; one son, Bryan (Karen Shepard) Umbanhowar of Rankin, IL; and nine grandchildren, Erin Corean, Andrea, Paige, and Glenn Gummere, Sam, Brandon, and Chris Umbanhowar, and Madeline and Elanor Reynolds. Also surviving is Terry (Rhonda) Forshier of Naples, FL, who was raised as her brother. She was preceded in death by her parents whom raised her and one sister, Susan Townsend. Mary Ann worked as a CNA doing in-home health care until her retirement. She was a member of the East Lynn United Methodist Church and also a member of the WSCS church group. She enjoyed working crossword puzzles and cooking. A visitation will be held 11:00 A.M. – 1:00 P.M. Monday June 10, 2019 at Anderson Funeral Home 427 E. Main St. Hoopeston, IL. The funeral service will follow the visitation and will begin at 1:00 P.M. Monday at the funeral home. Burial will follow in the East Lynn Cemetery in East Lynn, IL. Memorials may be made to the American Cancer Society 2509 S. Neil St. Suite 1, Champaign, IL 61820.

The family of Mary Ann Umbanhowar created this Life Tributes page to make it easy to share your memories.

Send flowers to the Umbanhowar family.