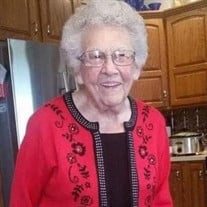 Mary Fern Ingram, 98, of Rossville, IL, passed away at 7:10 P.M. Thursday October 28, 2021, at her home surrounded by her loving family. She was born March 28, 1923, in Bismarck, IL, the daughter of Jesse E. and Ferne (Dines) Sizelove. She married Robert N. Ingram on January 21, 1946, in Danville, IL. He preceded her in death. She is survived by eight daughters, Sheila Browne (Scott Sprague), Sherry (Allen) Decker, Bobbette (Kenneth) Gammon, Pamela (Gene) Rife, Donna (Rick) White, Mary Jo (Bob) Ray, Cheryl (Mike) Peters, and Jackie (Steve) Maden; one son, Robert J. (Kim) Ingram; two sons-in-law, Fred Sprinkle and Don Van Gieson; one sister-in-law, Donna Sizelove; 20 grandchildren; 30 great-grandchildren with 3 on the way; 7 great-great-grandchildren with one on the way; and many nieces and nephews including a special niece, Angie Sizelove Shirk. In addition to her husband, she was preceded in death by her parents; one daughter, DeAnna; one brother, Bill; and one son-in-law, Sam Browne. Mary worked as a switchboard operator in Bismarck. During the war, her family moved to Indianapolis where she worked at the Chevrolet factory making tank parts. She worked most summers at Stokely- Van Camp during corn pak and used that money to help buy her children’s school clothes. Mary also worked part-time at the post office. She was a member of the Rossville United Methodist Church. She was also a member of the American Legion Auxiliary for 60 years, the VFW Auxiliary, and the Women of the Moose for 59 years. Mary was a great cook and was always known for her fried chicken, potato salad, and chopped suey. She enjoyed doing puzzles, reading, gardening, and embroidery. She also enjoyed going to auctions and collecting antiques. Mary loved her family very much and dedicated her life to all of them. A visitation will be held 4:00 – 8:00 P.M. Tuesday November 2, 2021, at Anderson Funeral Home 427 E. Main St. Hoopeston, IL. The funeral service will be held at 11:00 A.M. Wednesday November 3, 2021, at the funeral home with Pastor Chris Quick officiating. Burial will follow in Rossville Cemetery in Rossville, IL. Memorials may be made to the Rossville Ambulance P.O. Box 176, Rossville, IL 60963 or IMH Hospice 200 Laird Lane, Watseka, IL 60970.

The family of Mary Fern Ingram created this Life Tributes page to make it easy to share your memories.

Send flowers to the Ingram family.