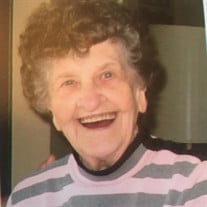 Mary Lucille Furrow, 94, of Hoopeston, IL, passed away at 10:45 A.M. Monday November 20, 2017, at her home. She was born September 12, 1923, in Hoopeston, IL, the daughter of Albert and Gertrude (Colvin) Carter. She married Raleigh Eldon Furrow... View Obituary & Service Information

The family of Mary Lucille Furrow created this Life Tributes page to make it easy to share your memories.

Send flowers to the Furrow family.