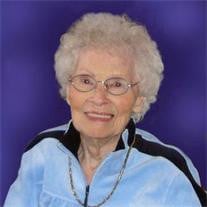 Mary Josephine Banks, 94, of Hoopeston, IL passed away at 12:41 P.M. Friday November 2, 2012 at the Heritage Health Nursing Home in Hoopeston, IL. Mary was born November 21, 1917 in Malin, County Donegal in Ireland, daughter of Michael and Mary McLaughlin. She married Herman E. Banks on June 2, 1945 in London, England. He preceded her in death on May 26, 2002. Surviving are two sons: Herman F. (Eve) of Virginia Beach, VA and Michael P. (Gwenna) Banks of Danville, IL and one daughter: Kathleen A. (Frank) Bonetti of Glenview, IL.; seven grandchildren: John (Kandi) Banks, Christopher, Ryan, Kyle and Greg Banks and Frank Jr. and Michael Bonetti; four great-grandchildren; one sister-in-law: Helen (Ken) Murry of Hoopeston, IL. and several nieces and nephews in both the United States as well as Ireland, England and Scotland. Preceding her in death are her parents, four sisters: Sadie, Kathleen, Annie and Bridie; one brother: Dennis and a daughter-in-law: Mary Banks. Mary met her husband in late 1944 in London, England where he was stationed in the military and she worked at Northwestern Hospital as a nurse. They married in June 1945. She then came over to the United States as a "war bride" and together they began their life in Hoopeston, IL. Mary was a licensed practical nurse and worked at the Hoopeston Hospital for 10 years and later was a private duty nurse for several families in Hoopeston, helping out in many homes. Mary was a member of St. Anthony's Catholic Church for more sixty years and was very active in the Altar and Rosary Society. She also served as a den mother in the Cub Scouts. Mary also very much enjoyed gardening and crocheting.

The family of Mary Banks created this Life Tributes page to make it easy to share your memories.

Send flowers to the Banks family.