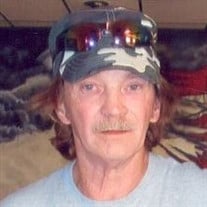 Marshall D. Burton, 62, of Hoopeston, IL, passed away peacefully at his home with loved ones by his side on Tuesday January 13, 2015 at 6:04 P.M. He was born on November 10, 1952 at home in Delmer, KY, the third son born to Cletis B. and Inzia Toy E. (Tarter) Burton. As a young boy, he moved to Hoopeston, making it his lifelong home. He is survived by his beloved Mary Jennings of Hoopeston, IL, who he spent the last thirteen years of his life with; one daughter, Marci; two sons, Max and Michael; one sister, Willa Mae Burton of Hoopeston, IL; three brothers, Marvin Burton of Georgetown, IL, Michael Ray Burton of Rockford, IL and Earl Jay Burton of Edwardsville, IL; several grandchildren and many nieces and nephews. He was preceded in death by his parents, his step-mother Rosie and one brother Roy E. Burton. Marshall was a hardworking man his entire life. He worked for the City of Hoopeston in the late 70’s & 80’s, working for the Street and Alley Department and later working at Floral Hill Cemetery. In his later years, he worked at the Hoopeston Pallet Factory for 10 years before retiring in 2007 due to health reasons. A man of many trades, there wasn’t anything he couldn’t fix or do. Most of his life, he enjoyed working on and restoring cars. For the past five years, he had been restoring a 1981 Corvette. Sadly, God called him home before he could finish it. He enjoyed Nascar and stock car racing and watching westerns. Listening to old country music and bluegrass were favorites as well. Often he would return to his roots, making many trips there with Mary. He also had a great love for dogs, especially his dog for the past ten years, Buster. Marshall enjoyed his family and friends and especially liked it when they brought him something to fix. A man with a good heart, he was always willing to help a person or animal in need. Per his wishes, he will be cremated. A visitation will be held 10:00 – 11:00 A.M. Tuesday January 20, 2015 at Anderson Funeral Home 427 E Main St. Hoopeston, IL. A memorial service will follow the visitation and will begin at 11:00 A.M. Tuesday January 20, 2015 at the funeral home, with Rev. Dustin Wells officiating. Burial will be held at a later date. Memorials may be made to the donor’s choice.

The family of Marshall Burton created this Life Tributes page to make it easy to share your memories.

Send flowers to the Burton family.