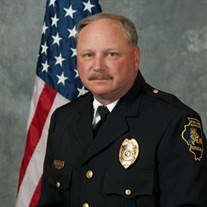 Mark Scott Drollinger, 54, of Hoopeston, IL., passed away at 6:45 A.M. Thursday, July 6, 2017 at his home. He was born April 22, 1963, in Danville, IL, the son of Ralph E. Drollinger and Beverly (Watson) Drollinger. Ralph survives in Hoopeston. He married Susan Ward on March 17, 2017 in Hoopeston. She survives in Hoopeston. He is survived by one son, Patrick Drollinger of Hoopeston, IL; one step son, Chris Land of Ridgefarm, IL.; step mother V. Jean Taflinger Drollinger; one sister, Nina Drollinger of Rankin, IL., one step sister, Debra Mae (Lupe) Rivera of Grand Prairie, Texas; one step brother, Phil (Dee) Hollen of Dallas, Texas; an aunt, Bonnie Watson Swan; two uncles, Danny (Gale) Watson and Howard (Carol) Drollinger and several nieces and nephews. He was preceded in death by his mother, sister, Vickie Drollinger (Roger) Beaty and grandparents. Mark was Chief of Police for the City of Hoopeston. He was a former investigator for the Vermilion County Sherriff’s Department. He was also a former Vermilion County Board member and a Hoopeston City Council member. Mark served in the United States Air Force, was a member of the United States Golf Association, Hubbard Trail County Club, American Legion, Masonic Star Lodge 709, and the United Fund of Grant Township. He loved golfing at Hubbard Trail, the children’s time at the library, visiting the kids at the school, and getting together every Sunday with his buddies to watch the Bears games. He loved to visit the French Quarters in New Orleans and was an avid Chicago sports fan. Mark had an infectious laugh and a wicked sense of humor and he lived his life to the fullest. A visitation will be held 3:00 P.M. – 7:00 P.M. Tuesday July 11, 2017 at the First Church of God 1004 E. Orange St. Hoopeston. Masonic rites will be held at 7:00 P.M. The funeral service will be held 1:00 P.M. Wednesday July 12, 2017 at the First Church of God with Pastor Micah Mobley officiating. Military rites will be accorded by the Hoopeston American Legion Post 384. Per his wishes, cremation rites will be accorded following the funeral. In lieu of flowers, memorials may be made to the Hoopeston Explorer Post 511 301 W. Main St. Hoopeston, IL 60942 or the United Community Fund of Grant Township 525 S. Market St. Hoopeston, IL 60942.

The family of Mark S. Drollinger created this Life Tributes page to make it easy to share your memories.

Send flowers to the Drollinger family.