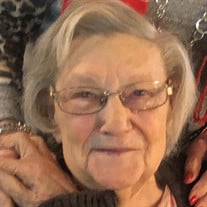 Marjorie Imogene McKinney Carlson, 90, of Hoopeston, IL passed away at 8:47 P.M. Wednesday, May 20, 2020 at Carle Foundation Hospital in Urbana, IL. She was born January 5, 1930, the daughter of William and Theda Marie (Bainbridge) Milton. She married Elmer Richard McKinney in 1948 and he preceded her in death in 1963. She later married Roy Carlson on February 14, 1967. He preceded her in death on May 11, 2015. She is survived by one daughter, Bridgette (Gary) Smith of Florida; one son, Steve McKinney of Hoopeston, IL; one step-daughter, Lynn Carlson; one step-son, Randy Carlson; one granddaughter, Teri Lynn (Ross) Sutherland, one great-grandson, David Sutherland; one sister-in-law, Lietta Milton; several nieces and nephews; special family, Todd and Pat Bailey; and a special neighbor, Cindy. She was preceded in death by her parents; one brother, Harold Milton; and one step-son, Bruce Carlson. Marjorie was a homemaker. She attended the First Presbyterian Church in Hoopeston and was a past member of the Eastern Star where she had served as a Worthy Matron. Marjorie enjoyed knitting, crocheting, and visiting with family, friends, and neighbors. She loved her special cat, Taffy. Per her wishes, cremation rites will be accorded. Memorials may be made to the First Presbyterian Church 915 E. Orange St. Hoopeston, IL 60942.

The family of Marjorie Imogene McKinney Carlson created this Life Tributes page to make it easy to share your memories.

Send flowers to the Carlson family.