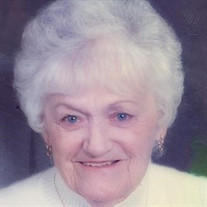 Marie E. Kietzmann, 88, of Hoopeston, IL, passed away at 11:40 A.M. Monday January 26, 2015 at Heritage Health Therapy and Senior Care in Hoopeston, IL. She was born September 10, 1926, in Wellington, IL, the daughter of William O. and Cora Esther (Carey) Hymer. She married George D. Kietzmann on February 14, 1944, in Danville, IL. He preceded her in death on October 23, 2011. She is survived by three daughters, Vickie (Bob) Murphy of Bismarck, IL, LaVonne (Tom) Morin of Chatsworth, CA and Cynthia Kaag of Westville, IL; two sisters; 7 grandchildren; 8 great-grandchildren and several nieces and nephews. She was preceded in death by her parents, one sister and one brother. Marie worked at TRW in Watseka for ten years and later worked at Bloyd’s Grocery in Hoopeston for 10 years, before retiring. She enjoyed having rummage sales, listening to country music and attending concerts, but the most important thing to her was her family. Marie loved spending time with her children and grandchildren and enjoyed attending her grandchildren’s activities and sporting events. A visitation will be held 11:00 A.M. – 1:00 P.M. Saturday January 31, 2015 at Anderson Funeral Home 427 E. Main St. Hoopeston, IL. The funeral service will follow the visitation and will begin at 1:00 P.M. Saturday January 31, 2015 at the funeral home, with Rev. Wade Meranda officiating. Burial will follow in the Floral Hill Cemetery in Hoopeston. Memorials may be made to the Hoopeston First Presbyterian Church 915 E. Orange St. Hoopeston, IL 60942.

The family of Marie E. Kietzmann created this Life Tributes page to make it easy to share your memories.

Send flowers to the Kietzmann family.