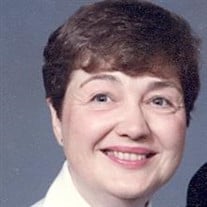 Margaret June Norton Ritter, age 88, went to be with the Lord on July 12, 2015. Daughter of the late Arnet Owen Norton and Mary Elta Smith Norton, June is survived by three sons, Larry (Mary) of Rossville, IL; Randy, of Franklin, WI; and Jay (Patty) Ritter of Godfrey, IL. She had six grandchildren, Michael (Stacey) Ritter, with Zoe & Emma; Jill (Luke) Lindberg, with Lillian; Brad (Jenny) Ritter with Benjamin, Jude & Ezra; Amanda (Brandon) Bugos, with Maggie; Alisha (Aaron) Cobb, with Micah; and Anna Ritter. She was preceded in death by Lawrence, her husband of 56 years, her sister Mary Helen (Myron’s twin), her brothers Richard and Myron, her sister Irene Norton Hasselbring, and great-grandson Samuel Irvin Cobb. June was born at home on June 18, 1927, the 4th child of Arnet and Elta Norton, who farmed in the Rossville/Antioch community. She attended the one-room Norton School near her home where she “could kick a ball high over the schoolhouse, which none of the boys could do.” During her early years she picked up the nickname Daisy. Her sister Irene called her DJ (Daisy June) almost exclusively. June’s school days were dramatized by her grandchildren in, “A Day in the Life of June Norton,” which premiered in her family room. June graduated from Rossville High School in 1945, then worked as a teller in banks in Danville and Rossville. She married Lawrence Eugene Ritter on September 8, 1946, after Lawrence had returned from WWII. She was an active and dedicated lifelong member of Antioch Church of Christ. She taught Sunday School and VBS, and played the organ for more than 40 years. She knew the number of many hymns in the hymnal, and could report when last it was sung. She also taught piano lessons to many students in the community. Lawrence was Dean of a week of camp at LRCA for 27 summers—Christian Workers Week. June made a huge contribution to its success, as Lawrence’s behind-the-scenes secretary/personal assistant. Grandma and Grandaddy’s house was a haven of love and play. An accomplished seamstress and knitter, Grandma often delighted her grandchildren with projects to enhance their imaginations and play. On rainy days, Grandma would organize a treasure hunt in her house, or lend her old banking supplies to a game of store/bank. During the summer, she had wading pools ready in the back yard, or an air tent inside. Her basement transformed into a boathouse, and her corn crib into a stage. Grandma always stopped what she was doing to watch the shows created there. She introduced her grandchildren to classic movies like White Christmas, Singing in the Rain, and Summer Stock. As her grandchildren grew older, she became an impromptu driving instructor and counselor when needed. Grandma really listened and empathized. She embodied love, joy, peace, patience, kindness, goodness, faithfulness, gentleness and self-control in abundance, and all those who were touched by her life are blessed to have known her. A visitation will be held 4:00 P.M. – 7:00 P.M. Wednesday July 15, 2015 at Anderson Funeral Home 427 E. Main St. Hoopeston. A celebration of June’s life will be held 11:00 A.M. Thursday July 16, 2015 at Antioch Church of Christ 37604 N. 1900 E. Rd Rossville, IL, with Pastor Earl Eells officiating. Burial will be at Rossville Cemetery. Memorials may be made to Antioch Church of Christ 37604 N. 1900 E. Rd Rossville, IL 60963.

The family of Margaret June Norton Ritter created this Life Tributes page to make it easy to share your memories.

Margaret June Norton Ritter, age 88, went to be with the Lord...