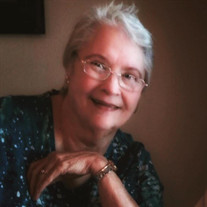 Margaret Arlene Greenberg, 80, of rural Ambia, IN, passed away at 10:11 P.M. Thursday August 1, 2019 at St. Vincent Seton Hospital in Indianapolis, IN. She was born March 15, 1939, in Riley, IL, the daughter of Delbert and Elizabeth (Morgeson) Matthews. She married Kenneth Wayne Greenberg on August 10, 1958 at the Christian Church in Ambia, IN, and they were married for almost 61 years. He survives. She is also survived by four daughters (who she proudly introduced as Daughter #1, #2, #3 or #4), Becky Greenberg-Li of Avon, IN, Debra Greenberg-Hendren of Hoopeston, IL, Karen Greenberg-Shepard (Bryan Umbanhowar) of Rankin, IL, and Krista (Ben) Greenberg-Swisher of Indianapolis, IN. Survivors also include one sister, Carol Lantis of Hoopeston, IL; one brother, Delbert “Bud” Matthews of Melbourne, FL; and two grandsons, Andrew Hendren and Kyle Morgan. She was preceded in death by her parents, Delbert and Elizabeth Matthews; one sister, Marilynn Vandenberg; and one brother, Robert Matthews. Margaret was a homemaker and proud wife of a farmer. She was a member of the Ambia United Methodist Church where she taught Sunday school and was an Annual Conference Delegate, Communion Steward, and Church Board Secretary. She also served as District Officer of Church Women United and President of United Methodist Women. She especially loved decorating the Church each Christmas with her daughters, and was the voice everyone listened for when singing Hymns every Sunday morning. Margaret was a member of the Benton County Musettes and served as a Prairie Green Township Election Judge and the Ambia Alumni Association Secretary and President. She enjoyed spending time with her family, singing, cooking, planting flowers, sending greeting cards, and driving her red Ford Edge. A visitation will be held 10:00 A.M. – 12:00 P.M. CST Wednesday August 7, 2019 at the Ambia United Methodist Church, 208 S. 3rd St. Ambia, IN. The funeral service will follow the visitation and will begin at 12:00 P.M. CST Wednesday at the church with Pastor Noel Whiteman and Rev. Don Williams officiating. Burial will follow in Floral Hill Cemetery in Hoopeston, IL. Memorials may be made in Margaret’s honor to the Ambia United Methodist Church, with the funds being donated to the Pine Creek Camp swimming pool fund. Margaret regularly supported this camp and made dozens of curtains for their cabins.

Margaret Arlene Greenberg, 80, of rural Ambia, IN, passed away at 10:11 P.M. Thursday August 1, 2019 at St. Vincent Seton Hospital in Indianapolis, IN. She was born March 15, 1939, in Riley, IL, the daughter of Delbert and Elizabeth (Morgeson)... View Obituary & Service Information

The family of Margaret Arlene Greenberg created this Life Tributes page to make it easy to share your memories.

Margaret Arlene Greenberg, 80, of rural Ambia, IN, passed away...

Send flowers to the Greenberg family.