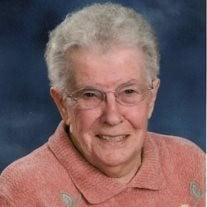 Margaret Louise Gocking, 82, of Hoopeston, IL, passed this life at 11:42 P.M. Tuesday January 21, 2014 at Heritage Health in Hoopeston, IL. She was born July 15, 1931 in rural Potomac, IL, the daughter of Emil and Letha (Shoaf) Hickman. She married Billy D. Gocking on December 30, 1950 in Los Angeles, Ca. He preceded her in death on July 15, 2006. Surviving are two daughters, JoAnn (Bob) Charbonneau and Lisa (Danny) Danner, both of Hoopeston, IL; one granddaughter, Ashley Danner of Hoopeston, IL; six step-grandchildren; ten step-great-grandchildren and several nieces and nephews. She was preceded in death by her parents; one sister, Irene Powley; two brothers, Russell Hickman and Paul Dean Hickman and two nephews. Margaret was a homemaker. She graduated from East Lynn High School and many years ago had worked at the Grab-It-Here Grocery and the Meadow Gold Dairy, both in Hoopeston. She was a member of the Hoopeston Community Church of the Nazarene and the Red Hat Society. Margaret was highly skilled at crochet and dozens of people across the area were blessed to be the recipients of her beautiful handmade afghan’s, lap robes, prayer shawls, slippers and baby caps. She also enjoyed cooking, reading, gardening, visiting with family and friends and walks with her devoted dachshund, George. Memorials are suggested to the Hoopeston Community Church of the Nazarene 402 E. Honeywell Ave. Hoopeston, IL 60942 or the Hoopeston Public Library 110 N. 4th St. Hoopeston, IL. 60942.

The family of Margaret Louise Gocking created this Life Tributes page to make it easy to share your memories.

Send flowers to the Gocking family.