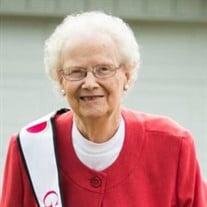 Margaret Jeanette Couch, 94, formerly of Owensville, Ind., and currently of Hoopeston, Ill., passed away April 17, 2021, at Autumn Fields Adult Community, Hoopeston. Jeanette was born May 25, 1926, to the late Orville and Anna (Gordon) Barrett. She graduated from Owensville High School in 1944 and married George Melvin Couch on Sept. 25, 1948. They celebrated 54 years of marriage before his passing. In 1951, she and Melvin welcomed their first son, William “Bill” Barrett Couch. In 1956, son Bobby Lee Couch was born and passed away. She worked as a secretary at the Owensville Convalescent Home and then opened The Gifted Shop, a craft consignment shop in Owensville. She was also a proud farm wife, and attended many cattle shows across the country for son, Bill. Jeanette and Melvin could be found at many Gibson County Fairs and Owensville Watermelon Festivals through the years with their homemade ice cream and “hokey pokey” stand. She was also an avid baker, and her homemade angel food cake and Italian cream cake were crowd favorites. A strong faith in God always radiated from within Jeanette, and she was the epitome of the Proverbs 31 woman. She and Melvin were longtime members of the Cumberland Presbyterian Church, where Jeanette was a member of the Cumberland Presbyterian Women and church choir; and then of the First Christian Church of Owensville, where she and Melvin were baptized together. Jeanette always welcomed others with hospitality, shared gifts, and enjoyed serving the community in a variety of ways, including serving on the Owensville Cemetery Board. She was honored for that service by being named the 2016 Owensville Watermelon Festival Parade Grand Marshall. Jeanette’s greatest pride came through her family, of which she spoke often. She is survived by grandson, Willy, and his wife, Tracie, Marshall, Okla.; granddaughter, Christy Couch Lee, and her husband, Craig, Wellington, Ill.; and three great-grandchildren: Waylon Lee, Nolan Lee, and Caroline Lee, also of Wellington. She is also survived by siblings Rebecca Marvel, Rosetta Dunigan, and Jerry Barrett, all of Owensville. She was preceded in death by her parents, Orville and Anna; husband, Melvin; sons, Bill and Bobby; and siblings, Francis Barrett, Robert Barrett, Marilyn Gwaltney, and Carolyn Barrett. A funeral service celebrating Jeanette’s life will be held Friday, April 23, 2021, at 11 a.m., at the Owensville First Christian Church, 4680 W State Road 168, Owensville, Ind., with Bart Newton officiating. Burial will follow at the Owensville Cemetery. Visitation will be held Thursday, April 22, 2021, from 5-7 p.m., at the church. In lieu of flowers, memorials can be made to the Owensville First Christian Church, 4680 W State Road 168, Owensville, IN, 47665.

The family of Margaret Jeanette Couch created this Life Tributes page to make it easy to share your memories.

Send flowers to the Couch family.