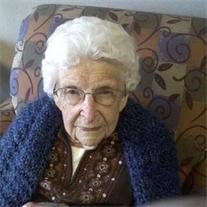 Lorraine Dorman, 95, of Champaign, IL, formerly of Rankin, IL, passed away at 3:55 P.M. Tuesday June 4, 2013 at the Gibson Area Hospital in Gibson City, IL. She was born February 7, 1918, the daughter of Everett Thomas and Nelle Jane "Rusk" Williams. She married W.V. "Bud" Dorman on December 28, 1935. He preceded her in death. She is survived by: one daughter, Janet (Bill) Sutton of Champaign, IL; one sister, Doris Knapp of Cissna Park, IL; one sister-in-law, Maxine Williams of Hoopeston, IL; two grandchildren, Stephanie Brown and Brad Cannon, Jr.; five great-grandchildren and many nieces and nephews. She was preceded in death by her parents, one sister, Marie Thompson, brother, Russell Williams and brother-in-law, Melvin Knapp Lorraine was a hairdresser for forty-five years, owning her own beauty shop. She was a member of the Rankin United Methodist Church in Rankin, IL, where she was a Sunday school teacher and was active in the Rankin Methodist Women's Club. Lorraine was also active in the Senior Women's Club. She enjoyed working crossword puzzles and cryptogram puzzles.

The family of Lorraine Dorman created this Life Tributes page to make it easy to share your memories.

Send flowers to the Dorman family.