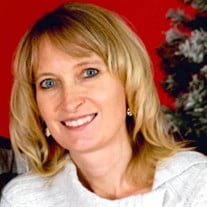 Lori Nichole Wilson, 43, of Hoopeston, IL, passed away at 2:23 A.M. Friday December 8, 2017, at Carle Hoopeston Regional Health Center in Hoopeston, IL. She was born July 28, 1974, in Danville, IL, the daughter of Roger Keith and Linda (Lindley) Meeker. She married Jammie Ray Wilson on September 19, 1992 in Hoopeston. He survives in Hoopeston. She is also survived by two daughters, Sydney (Zach) Wilson-Puralewski of Terre Haute, IN and Alivia Wilson of Hoopeston, IL; one son, Chase Wilson of Hoopeston, IL; one sister, Jill Meeker Shaw of Galesburg, IL; two sisters-in-law, Charlotte Wilson of Hoopeston, IL and Kayla Wilson of Hoopeston, IL; and 11 nieces and nephews. She was preceded in death by her grandmother, Joyce Lindley; her father-in-law, Lannie Wilson and mother-in-law, Joyce Wilson. Lori was a homemaker. She also owned a daycare and Graphics & Signs by Lori for many years. She attended New Beginnings Church in Hoopeston and enjoyed reading her devotionals and listening to Kenneth and Gloria Copeland. She volunteered at her church, the school and Maple PTO. Lori loved the beach and going to Florida with her family. She also enjoyed racing with her husband and family and the love of her life was her kids and family. A visitation will be held 10:00 A.M. – 1:00 P.M. Tuesday December 12, 2017 at Anderson Funeral Home 427 E. Main St. Hoopeston, IL. The funeral service will follow the visitation and will begin at 1:00 P.M. Tuesday at the funeral home, with Mike and Deb Robling officiating. Burial will follow in Floral Hill Cemetery in Hoopeston. Memorials may be made to a college fund for Lori’s children.

The family of Lori Nichole Wilson created this Life Tributes page to make it easy to share your memories.

Send flowers to the Wilson family.