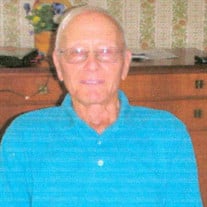 Lloyd William Morts, 91, of Rossville, IL, passed away peacefully at 3:52 A.M. Saturday April 2, 2016 at his home. He was born March 19, 1925, on a farm near Hoopeston, IL, the twin son of Sharon and Grace (Bird) Morts. He grew up farming and graduated from Hoopeston High School. He married Virginia Sue Smith on June 25, 1950 at the Rossville United Methodist Church in Rossville and they celebrated 66 years together last June. She survives in Rossville. He is survived by four daughters, Terry Alexander of Roseville, IL, Janet Glenn (Ron Kolacek) of Sun City West, AZ, Nancy (Marvin) Turner of Veedersburg, IN and Donna (Doug) Houmes of Vail, AZ; one son, William Lloyd (Tammy) Morts of Santa Clarita, CA; six grandchildren, Jenny and Megan, Alexsha and Amanda and Tristen and Cody and many nieces and nephews. He was preceded in death by his parents; his daughter, Judy; one sister, Marjorie Beckner; his twin brother, Floyd and his older brother, Francis. Lloyd proudly joined the U.S. Marine Corps after high school graduation in 1943. He participated in the invasion of Peleliu and was awarded the Navy and Marine Corps medal for heroism in 1945 for helping rescue a pilot and gunner from a burning aircraft. He was a member of the Rossville United Methodist Church and a member of the Rossville Masonic Lodge. He served as a past Rossville Grade School board member and a Rossville Village board member. Lloyd was also a member of the Rossville American Legion and the Farm Bureau. Once out of the Marine Corps he continued farming. In the mid 1970’s Lloyd and Susie started a small business, Morts Ice Cream Parlor, where they served food, pies and ice cream. Lloyd always had a bit of a sweet tooth and loved ice cream with chocolate on top. When he retired from farming, he continued to stay active. He took up golf and worked at the Cubs spring training camp selling water. He loved being with his family and so he and Susie split time up, spending winters in Mesa, AZ and summers in Rossville, so that they could be near family members in both places. He enjoyed going for walks with their little dog, Sparky. He planted and took care of the flower bed for the school and could be found outside doing yard work and mowing. Lloyd had a great sense of humor and was always ready with a joke. A visitation will be held 11:00 A.M. – 1:00 P.M. Wednesday April 6, 2016 at Anderson Funeral Home 427 E. Main St. Hoopeston, IL. The funeral service will begin at 1:00 P.M. Wednesday April 6, 2016, at the funeral home, with Steve Unger officiating. Burial will follow in the Rossville Cemetery in Rossville, IL. Military rites will be accorded. Memorials may be to the Rossville United Methodist Church 116 Maple St. Rossville, IL 60963 or to the donor’s choice.

The family of Lloyd William Morts created this Life Tributes page to make it easy to share your memories.

Send flowers to the Morts family.