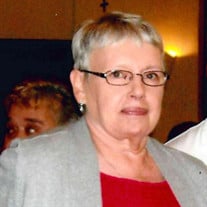 Linda Lou (Stump) Dunavan, 67, of Rossville, IL, passed away at 11:50 A.M. Wednesday February 3, 2016 at her home in Rossville. She was born July 21, 1948 in Danville, IL, the daughter of Henry “Bill” Franklin and Ruth Eilene (Meeker) Stump. She married Gary Lee Dunavan on July 18, 1969 in Pence, IN. He survives in Rossville. She is also survived by her mother, Ruth Eilene Stump; two daughters, Nikki (Andy) Smith and Kristin (Chris) Boen both of Rossville, IL; two sons, Jamie Dunavan and Scott (Somer) Dunavan both of Rossville, IL; six grandchildren, Bryson, Jarrett, Kayla, Kylie, Tiffany and Dawson. She was preceded in death by her father, Henry and grandparents, Roy and Ethel (Thornsbrough) Meeker and Charles and Jessie (Price) Stump. Linda worked at the Bank of Rantoul for seventeen years. She was a member of the Rossville United Methodist Church. She enjoyed watching football, baseball, college basketball and game shows on T.V. Linda loved spending time with her family. A visitation will be held 2:00 P.M. – 5:00 P.M. Sunday February 7, 2016 at Anderson Funeral Home 427 E Main St. Hoopeston. The funeral service will be held at 11:00 A.M. Monday February 8, 2016 at the funeral home, with Pastor Gary Milton officiating. Burial will be in the Mann’s Chapel Cemetery in Rossville. Linda’s family would like to thank the nurses and staff at Danville Cancer Center for the compassionate care they provided during her illness. Memorials may be made to the American Cancer Society 2509 S. Neil St. Champaign, IL 61820.

The family of Linda Lou Dunavan created this Life Tributes page to make it easy to share your memories.

Send flowers to the Dunavan family.