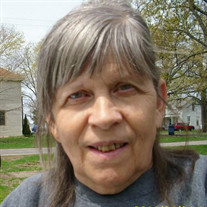 Linda DePoe, 73, of Ambia, IN, passed away at 12:20 P.M. Friday October 5, 2018, at Carle Hoopeston Regional Health Center in Hoopeston, IL. She was born October 30, 1944, in Danville, IL, the daughter of Cordie L. and Nellie (McGinley) Phillips. She married John Lawson and he preceded her in death. She later married Thomas A. DePoe Sr. on May 9, 1977 in Sitka, AK, and he preceded her in death. She is survived by one daughter, Janet DePoe of WA; one daughter-in-law, Shelley Lawson of AK; one son, Thomas A. DePoe Jr. of IN; one brother, Cordie (Bobbi Jo) Phillips of Rossville, IL; 7 grandchildren; 12 great-grandchildren; 2 nieces; and 2 nephews. She was preceded in death by her parents; one son, Wes Lawson Jr.; and a special friend, Herb Shaw. Linda was a postal worker. She attended the Ambia United Methodist Church. She enjoyed making candles and ceramics. Per her wishes, she will be cremated, and a graveside service will be held at 12:00 P.M. CST Wednesday October 17, 2018 at Floral Hill Cemetery in Hoopeston, IL. Memorials may be made to the Hoopeston VFW Post #4826, 428 W. Orange St. Hoopeston, IL 60942.

The family of Linda DePoe created this Life Tributes page to make it easy to share your memories.

Send flowers to the DePoe family.