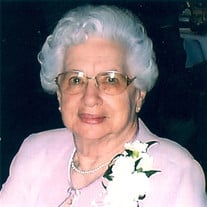 Lillian “Lil” Betka, 94, of Hoopeston, IL, formerly of rural Rankin, IL, passed away at 4:50 A.M. Saturday September 27, 2014 at Carle Hoopeston Regional Health Center in Hoopeston. She was born September 12, 1920, in rural Rankin, IL, the daughter of George and Anna (Kuntz) Ingold. She married Keith Betka on August 28, 1943 at the Rankin United Methodist Church in Rankin, IL. He preceded her in death in 1985. She is survived by one son, Larry (Carol) Betka of Hoopeston, IL; one sister-in-law, Margaret Hurliman of St. Joseph, IL; two grandchildren, Skip (Melissa) Betka and Denise Ebert; one great-grandson, Trent Betka and many nieces and nephews. She was preceded in death by her parents; two sisters, Anna Marie Kunce and Maxine Rollins and two brothers, George Ingold Jr. and Fred Ingold. Lillian was a homemaker and farm wife, helping her husband Keith run the family farm, doing many tasks. She was a past member of the East Lynn United Methodist Church for many years and was a current member of the Hoopeston First Presbyterian Church. Lillian was also a member of the Vermilion County Home Extension and Science Hill Birthday Club. She loved music and enjoyed playing the organ and playing bridge. Lillian had several hobbies, which included painting, stain glass, ceramics and she was an extensive reader, but her greatest enjoyment was spending time with her family. Memorials may be made to the Hoopeston First Presbyterian Church 915 E. Orange St. Hoopeston, IL 60942.

The family of Lillian "Lil" Betka created this Life Tributes page to make it easy to share your memories.

Send flowers to the Betka family.