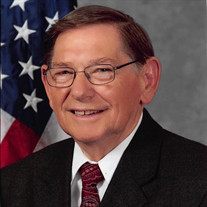 Lewis E. Mershon Jr., 89, of Hoopeston, IL, passed away at 1:16 A.M. Saturday November 26, 2016, at his home in Hoopeston. He was born October 26, 1927, in Springfield, OH, the son of Lewis E. and Hazel M. (Chapel) Mershon Sr. He married Lois Joan Kramer on August 30, 1949, in Richmond, IN. In 1951, Lewis was drafted into the United States Army during the Korean War, where he served in Germany with the Combat Engineers. After returning home from the service, he began ministering in Springfield, OH and later ministered in Indiana, before coming to Hoopeston in 1984. He served the Hoopeston Church of God from 1984 – 1994, before semi-retiring. This past October, he was recognized for 50 years of pastoral service in the state of Illinois. He was a chaplain for the Hoopeston Police Department and the Hoopeston Hospital. He enjoyed volunteering at the nursing home, visiting shut-ins for the church and was active in several community church organizations, including being the president of the Ministerial Association. Lewis was a member of the Magic Club and Clowns of America. He also enjoyed woodworking and wood finishing and loved visiting with others and socializing. Lewis is survived by his loving and devoted wife of 67 years, Joan of Hoopeston, IL; two sons, Keith (Elizabeth) Mershon of Danville, IN and Greg (Lori) Mershon of Rossville, IL; 5 grandchildren, Alexander (Laura) Mershon, Seth Mershon, Casey Mershon, Gage Wilson and Haley Wilson; 2 great-grandchildren and several nieces and nephews. He was preceded in death by his parents; 1 infant sister; 1 sister, Barbara and 2 brothers, Bobby and Billy. A visitation will be held 4:00 – 7:00 P.M. Wednesday November 30, 2016 at the First Church of God 1004 E. Orange St. Hoopeston, IL. The funeral service will be held at 11:00 A.M. Thursday December 1, 2016 at the church, with Pastor Micah Mobley officiating. Burial will follow in Floral Hill Cemetery in Hoopeston, with military rites being accorded by the Hoopeston American Legion Post #384 and the Hoopeston VFW Buddy Egnew Post #4826. In lieu of flowers, memorials may be made to the Hoopeston First Church of God 1004 E. Orange St. Hoopeston, IL 60942.

The family of Lewis E. Mershon Jr. created this Life Tributes page to make it easy to share your memories.

Send flowers to the Mershon family.